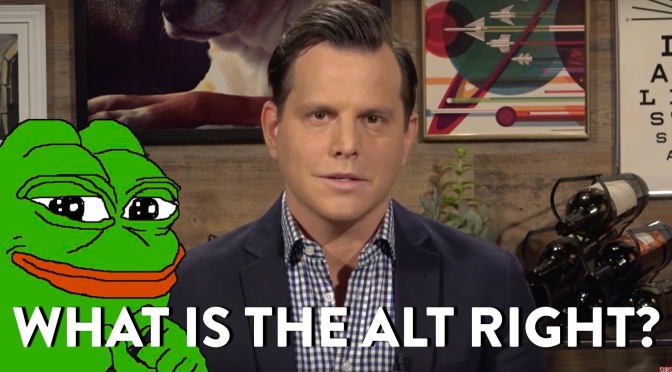 The reaction has been pretty stark.

In the ramp up to Hillary Clinton’s Alt Right speech and in the aftermath the Alt Right headed into the public media consciousness. Drawing together the appointment of Stephen Bannon with the conspiracy popularity of Infowars and the racist crew of Twitter trolls, she has allowed a layer of media scrutiny to somewhat misrepresent the Alt Right. Her speech was generally a positive move and none of us expected her to get all the details right. As profiles came from every major news outlet, few actually got the characterization of the Alt Right correct.

What this allowed for, and what was already happening as the Alt Right label became popular over the past few months, is received a layer of commentators and angry white voices have begun calling themselves Alt Right without holding the real ideological foundations. Breitbart, the Donald Trump campaign, Ann Coulter, Milo Yiannapoulos, and a whole range of Twitter commentators and Trump supporters have been labeled as Alt Right, either by the media externally or in a sort of self-imposed Edgelord identity.

This phenomenon has been labeled by those in the Alt Right as the Alt Lite, and while it has presented them with a huge boost in exposure, it has also created a problem for their ideological consistency.

The Alt Lite mainstreams most of the Alt Right’s most public and middle ground political positions. Immigration restriction, anti-political correctness, Islamophobic policies, anti-feminism, and other Trump-like proposals. These are all superstructural positions, manifestations of an underlying politic that many in the Alt Lite do not share. While places like Breitbart are helping to fight the Alt Right’s war on immigration and demonizing voices of color, they are not necessarily centered on their white nationalism, race and IQ beliefs, and vicious anti-Semitism

A recent story released by the Forward written by Josh Seidel called “I’m a Jews, and I’m A Member of the Alt Right” was the most cited of these, and likely the one that made the most Alt Right members angry. Here he pronounces a politically incorrect, Trump supporting opinion, one that is void of almost all the features that those of us who track far-right groups would actually ascribe to the Alt Right. He was one of the many commentators who have taken on the label, using the trendy term Alt Right to simply describe their own mildly controversial views, ones that are inconsistent among these voices and not set in the ideological roots that all actual Alt Right publications agree on.

Richard Spencer, who runs the National Policy Institute and the Radix Journal, is one of the centers of the Alt Right, and has been generally positive about this development. He calls himself “pro-Alt Lite,” but does say that they need to maintain ideological consistency and watch out for entryism. There is not likely to be actual conservative entryism into the Alt Right, but he is right that those with more middle ground views who simply want to appear “edgy” will help to moderate their movement.

The Right Stuff and its signature podcast, the Daily Shoah, was less happy when looking at this phenomenon, especially Jews calling themselves Alt Right. In an article called “I’m a Jews and I’m Party of the Alt Right, Trust Me Goy!” they provided an ironic commentary suggesting that conspiratorial Jews are trying to destroy the Alt Right from the inside. Here they outlined four key parts of the Alt Right that must be observed, including:

The last was incredibly important to them, and one that they stress in this article that jokingly takes on a “Jewish” voice.

Unfortunately, as I said earlier there is a very vocal minority of people who claim to be part of the Alt-Right who spread anti-Semitic memes all across the Internet. They share pictures of Jews being shoved into ovens like it’s nothing. If you ask them about their disrespect they claim the Holocaust never even happened. Can you believe that? In the Current Year people still believe that the 6 million were not gassed and ovened. I got so angry one day that I asked one of these Alt-Right pretenders where they got the idea that the Holocaust never happened. The pompous brat rattled off some gibberish about there “not being any paperwork explicitly calling for the extermination of the Jews.” He even showed me a stupid coin that had a swastika (OY VEY) on one side and a Star of David on the other. As if that’s supposed to mean anything! Then he had the gall to link me to some despic–uh, I mean, confused gentile pastor who babbled on about high tech ovens and asked a funeral director about cremation times. These people are loco, amigo! So, to summarize my feelings on the matter, I don’t really care. American children are told the truth about the Holocaust and the 6 million from age 5 onward. They’re made to read Night at least 3 times and told about Hitler’s sexual derangement due to having one testicle (He was probably into butt stuff too, goys.) They’re taken on field trips to one of a dozen or so handsomely funded Holocaust Museums at least once in their school careers. A vocal minority on Twitter doesn’t scare me; although, those parentheses got real old, real fast.

The most popular podcast on the Alt Right, Fash the Nation, also stressed that Jews cannot be a part of the Alt Right since the Alt Right itself is anti-Jew. What they say very clearly, and what is echoed on almost the entire core Alt Right publications from Counter Currents to the New Alternative Right, is that Jews are responsible for undermining Western identity through globalism, immigration, feminism, queerness, and other “degeneracies” that stop White men from running a nation “in their interests.” Fash the Nation actually sites another Alt Right commentator, Lawrence Murray (a joking Semitic pseudonym) and their “principles” of what makes up the Alt Right.

(We are shortening these obviously, they clearly think that their LONG definitions are important, but you will get the drift.)

While they try to have a conversational and inoffensive tone, the politic here is clear. This is ideologically in line with almost all neo-fascist programs, one that see the traditional gender roles as necessary, that racial groups are unequal, that democracy should only be for the racial “in group,” that freedom needs to be subsumed to only certain caste levels, and that Jews are the enemy. They go on to cite people like Kevin MacDonald, the anti-Semitic psychology professor who has made it his life’s work to prove that Judaism is a “group evolutionary strategy” to confuse Gentiles and undermine their nations.

Greg Johnson, the esoteric white supremacist founder of the Alt Right publishing house Counter Currents, posted an article that sums up a sentiment that we actually agree with completely. Called “The Alt Right Means White Nationalism…or Nothing at All” he outlines what the Alt Right is versus what the Alt Lite wants it to be.

Like paleoconservatism, the Alternative Right was simply a way that timid, status-conscious conservatives could flirt with racism and even anti-Semitism while maintaining some sort of pretense of mainstream credibility.

Johnson is not as sympathetic to the Alt Lite phenomon as others are because he notes that Counter Currents has not really seen a traffic bump through the search terms after the Clinton speech. This kind of analysis is a good metric for the development, one that Johnson has always been pretty apt at reading. Johnson’s work is ideologically consistent, one that shows the clear connection between the Alt Right and the esoteric mysticism, Germanic neopaganism, and occultism that many associate with the spiritual ideas that run parallel to fascist movements. While associating with the surface level of Alt Right “Shitlords” on popular websites and Twitter handles, Counter Currents continues to publish books by people like Savitri Devi, a white Hindu woman who believed that Hitler was a divine avatar and that the caste system should be enforced through authoritarian violence. While many on the Alt Right associate more with a atheist “race realist” perspective, there is still a reverence for these more occult and spiritual positions echoing through all Alt Right institutions, with some, like Neoreactionaries and the Radix Journal, being more explicit about the “spiritual” foundations for their racism.

Andy Nowicki, a writer who was popularized as a co-host of Vanguard Radio, the original podcast of Alternative Right, is now the editor of the New Alternative Right website (the original was deleted by Richard Spencer amid protest by Nowicki). In his article “What the Alt Right Means to Me (Hillary Clinton Remix),” echoes this sentiment, even though Nowicki himself is not a strict White Nationalist.

In general, places like American Renaissance, Red Ice Radio, and the vlogger Millennial Woes have all created “intro videos” for the Alt Right to help orient Alt Liters, all of which are explicit about their racism, anti-Semitism, and opposition to democracy and equality.

While the Alt Lite phenomenon may be difficult for those on the Alt Right, it also presents challenges for anti-fascists. If the Alt Right is dumbed down to just means iconoclastic American conservatism, it is harder to make the connections that their public ideas, like immigration restriction and Trump success, is rooted in white nationalism. That is the source of this politic even if some recent “converts” are using the Alt Right label without accepting all of its dirty laundry. What the Alt Right will do over the next several weeks is to double down on its more unsavory connections, something that will reverberate through the Alt Lite as it becomes more and more apparent what the phrase, and the ideology, really means.

For those on the anti-fascist left it means continuing to name names when it comes to the Alt Right, and to not let their silly arguments about crime, immigrations, and politically correct speech be the end of the conversation. Instead, we should help the Alt Right tell the truth, so to speak, so that they can consistently reveal who they are.

We need to call the Alt Right what it is: fascist.

12 thoughts on “Alt Light or Alt Right?: Understanding What the Alt Right Really Is”