Portland has become a center of antifascist resistance as civic nationalist, Alt Light organizations riding the Trumpian populist wave take to the streets in public displays of bigotry.  Following the far-right “free speech” rallies that Lauren Southern started in Berkeley after the cancelation of events for Anne Coulter and Milo Yiannopoulos in 2017, Patriot Prayer formed by provocateur Joey Gibson to celebrate Trump and accost the left.  They started in violent fashion, and one of their attendees went on two murder two people in an Islamophobic attack on a Portland train.  Since then, Portland has been generally disgusted by Patriot Prayer and Joey Gibson, but he keeps coming back to the city to hold his rallies and attack counter-protesters.

Now, Patriot Prayer has basically merged with the Proud Boys, the “Western Chauvinist” crew that is known for its street violence.  On June 30th, Patriot Prayer came with dozens of Proud Boys from multiple states and brutally attacked counter protesters in one of the most savage, and unwarranted, attacks in recent history.

Antifascist organizations like Rose City Antifa, the Pacific Northwest Antifascist Workers Collective, and Eugene Antifa, have fought back against Patriot Prayer, continuing to stop them from doing full-scale marches and having free reign of public space.  In response to the violence of June 30th, many organizers from Portland wanted to form an additional coalition to support the existing antifascist work, and to increase the numbers to include people that have not been involved in the more militant antifascist actions against Patriot Prayer.  Pop Mob then will create multiple “zones” of protest, respecting a diversity of tactics while also creating a safe protest space for many people who have felt threatened by the Proud Boys violence at previous Patriot Prayer events.

“We tried ignoring them, and that didn’t work,” points out Effie Baum, from Pop Mob.

Our plan is to bring together a wide coalition of folks in as large numbers as we can to show Patriot Prayer and other groups that he is associated with that we are not going to continue to tolerate this kind of hate in our city.  This is why it is so important for as many folks as possible to come out.  When all of us are together it can stop their attempts at taking over the city while also keeping each other much safer.

Patriot Prayer has continued to escalate in the weeks after the June 30th event, including coming down to the Occupy ICE PDX encampment to harass protesters in the process of cleaning up amid police repression.  The video of Proud Boy Ethan Michael Nordean (Rufio Pan Man) punching a protester went viral in Proud Boy circles, and he went on Alex Jones’ show to celebrate the action.  Jones himself has seemed to ally with the Proud Boys, and may even make an appearance on August 4th.  This particular date is just the first of other events, and August 5th has Patriot Prayer returning to Berkeley where they were pushed out in 2017 by a coalition of labor unions and community groups.

Rose City Antifa has continued their great work of doxxing the Portland area Proud Boys involved in this violence, and is also calling for militant antifascist resistance against Patriot Prayer on June 4th.  They will be working along with other militant antifascist organizations to mobilize in direct opposition to Patriot Prayer, not a distance away, but directly across from their supposed rally.  According to the RCA spokesperson we spoke with, this is to stop the ability of the far-right to organize, and grow, in Portland.

The goal of our action on August 4th is to show that the community will not allow violent nationalist opportunists to threaten our city and target our people.  We will overwhelm them both by force of numbers and commitment to defending our community.  Whatever it takes, we won’t allow Patriot Prayer’s political violence to become the new status quo in this country.

This also relies on direct confrontation as a way of eliminating Patriot Prayer and the Proud Boys’ ability to operate with impunity.

Without direct confrontation, PP and other white nationalist groups will feel entitled to threaten people wherever and whenever they like.  First they target antifascists and anti-ICE activists, then they target Pride, marginalized community spaces, minorities, and migrants.  They believe “might makes right,” and unless the community steps in to stop them, there is no telling who they will attack next for political gain.

All the antifascist groups, working in concert, get at different aspects of resistance, creates multiple fronts to push back on Patriot Prayer, and creates the space to get a huge wave of people involved.

“The entire purpose of [Patriot Prayer’s] event is violence.  From what I have seen, they have instigated the violence at all of the past rallies,” says Baum.

“Their speech has consequences, and we have the right to stand together against their hate in our city.”

Below we are posting the links to several of the FB event pages, starting with Pop Mob’s event page for the broad-based protest action that will be happening simultaneously.  Pop Mob will be having a large rally of unions and community organizations at 10:30 at City Hall, which will then, at 11:30, move to join the larger contingent at Waterfront Park. 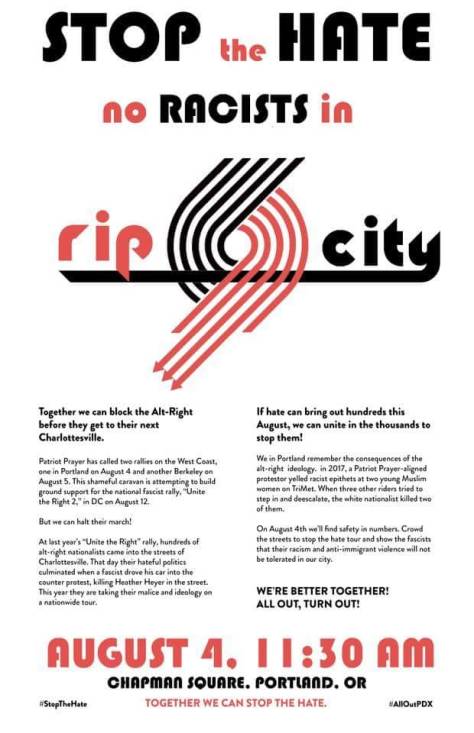