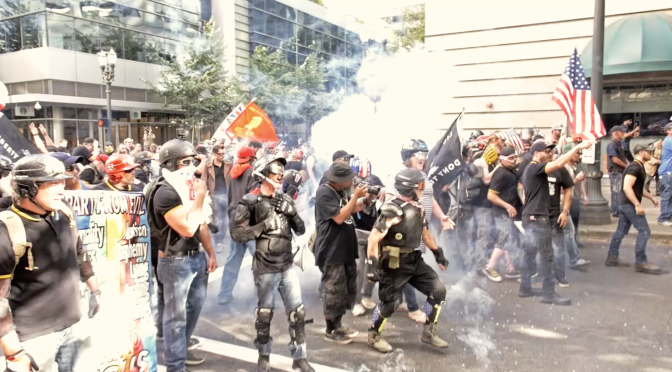 On June 30th, far-right provocateur Joey Gibson brought his group, Patriot Prayer, back to Portland in an effort to stoke the anger of a city grieving from violent racist attacks.  On June 3rd, Patriot Prayer held a march whose sole purpose appeared to be to fight the left.  Lacking in political content, the repeatedly marched their crowd into counter-protesters, attacking them at will.  The Proud Boys, the Alt Light street-gang started by Vice Media co-founder Gavin McInnis, has become the dominant portion of Patriot Prayer’s base as the rest of their larger support by Trump republicans slowly recedes.  Over the past year many their key young participants have joined the Proud Boys, to the point that Patriot Prayer seems to be simply an extension of the regional Proud Boys crews.

On June 3rd they attacked people with increased brutality, though were fought back readily by a crowd of antifascists organized by Rose City Antifa.  They eventually were unable to continue their marching and were chased off the streets as their numbers dwindled.  They vowed to return to “stand their ground,” announcing the June 30th date.

On the day of, it was clear that they had dug into their connections across the country and had Proud Boys from crews in multiple states including, reportedly, California, Washington, Oregon, Texas, Utah, and others.  The crowd was dominated by Proud Boys in their yellow/black Fred Perry shirts, and after a school bus of additional Proud Boys arrived from over the river in Vancouver, they numbered around 80 participants. (Note, some people have listed the number closer to 60, some closer to 100.  For our part, we counted about 80.)

They held their typical round of speeches, with long-winded diatribes from Joey Gibson comparing himself to the “founding fathers.”  Then a Proud Boy rapper named Political Muscle, a white guy with clunky rhymes, did raps about Antifa.  Another speaker discussed the Book of Revelation and the Satanists that control the government, and who were communists, were going to install all of us with RFID chips (The Mark of the Beast).

Once it was time for their march they got into multiple, well-planned formations and put on body armor, preparing to attack.  They were open about this, mentioning that they were there to push back on the left and to fight if they deemed it necessary.  They were hit with bottles, eggs, and other projectiles right out of the gate as they turned the corner away from the park.  Two blocks later they took a left and were met, without obstruction by the police, counter-protesters.  After a short standoff the Proud Boys charged protesters and attacked in brutal fashion, often ganging up on individuals and beating them on the ground.  Several people went completely limp on the ground and had to be rescued by passersby, and could have died without that support.  Ambulances had to come through to pull out the critically injured, including one protester who had cranial bleeding and a fractured skull.

Once the Proud Boys were pushed back, the police declared their permit pulled and the scene a riot, amid the dozens of flash grenades and pepper-balls they were firing.  The Proud Boys continued their march despite this, yelling at the police even though it was clear that law enforcement had let them attack protesters without objection and had aimed their crowd-control weapons almost exclusively at antifascist protesters.  One local reporter wrote that they had heard the police talking in a coffee shop nearby and saying that they were tired of this and would “just let them fight.”

As the march continue there were more and more disruptions from antifascists that were swarming on all sides, resulting in dozens of street brawls.  In several of these situations, as is clear in the video, the Proud Boys were allowed by the police to continue their beatings, and sometimes even appeared encouraged to do so.  Eventually Patriot Prayer was forced back into their park under police protection, unable to complete their march.

The video below clearly shows the Proud Boys level of violence, which is only increasing.  This was one of the most brutal situations of far-right violence in a city that has been marked by skinhead attacks, and as it escalates it seems that the Proud Boys could easily become murderers.  Without the antifascists there, including Rose City Antifa, the Pacific Northwest Antifascist Workers Collective, and Labor Against Fascism, a lot more people would have been hurt.  They successfully pushed back their advance and denied them unopposed use of the space, a victory that has continued for two years now.

Joey Gibson will be returning on August 4th with a similar strategy, and antifascists will be out there to stop him.