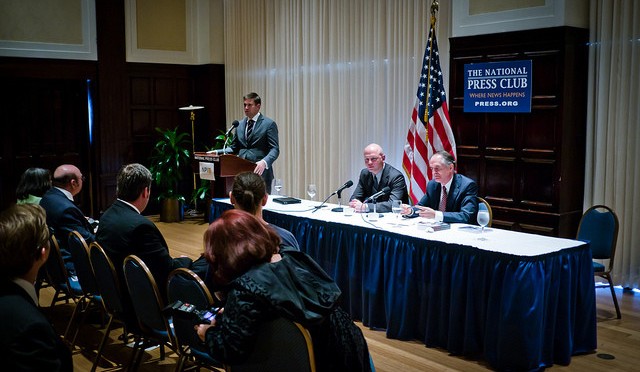 In an effort to double up their popular conferences, The National Policy Institute is going to be having a conference only a few short months after their Halloween event.  Set to coincide with the Conservative Political Action Conference, which makes sense with their use of the Alt Right branding, the event will bring together “shitlords” and white nationalists from the growing recesses of the internet-focused racialist movement.  The evening event, on March 5th, is going to be smaller than NPI’s regular conference event, which usually spans an entire day.  This conference, called Identity Politics, will bring together Richard Spencer, the NPI president, Kevin McDonald and RamZPaul.

Richard Spencer has been one of the people at the center of the recent upsurge in this particular wing of the white nationalist movement.  Focused on social media, podcasting, and YouTube conversation videos, the new Alt Right has evolved beyond what it had been previously.  Spencer coined the term in 2010 with his website Alternative Right, which was meant to bring together “dissident” right wing ideologues that were leftovers from paleoconservatism, libertarianism, the Old Right, traditionalism, and all the other “edge” philosophies that were leading in a neo-fascist direction.

This was a “big tent” approach that was meant to associate these disparate forces with each other, but he moved on from this approach when joining NPI and forming the Radix Journal.  The term Alt Right, however, stayed, and it became synonamous with a white nationalist movement that had little connection to the silly costumes of the KKK and neo-Nazis.  Instead, this group formed an ideology that was a hodgepodge of the new scientific racism of Human BioDiversity, the strange “critiques” of democracy from Neoraction, the general attack on egalitarianism, a focus on the spirituality of ethnic Heathenry, the traditionalism of Julius Evola, and a great deal of misrepresented scraps of the social sciences to justify “identitarian” focus on ethnic identity as well as classic racial hatred and anti-Semitism.  These people see themselves as a break from the racism of the past, yet they simply repackaged it for a different audience.

The new shift was largely from association with The Right Stuff and their cohorts, which focus on internet trolling, using internal jargon, repeating offensive jokes, and using social media and blogs as their primary vessel rather than any kind of organizing.  You would expect that this would change the speaking demographics of the NPI conference, but most of the people associated with this side of the movement do not use their real names and would not let their faces be seen lest anti-fascists identify and doxx them.  The main exceptions to this was Mike Enoch from the Daily Shoah’s appearance on the NPI conference podcast, though he wore sunglasses during the panel to try and conceal his identity.  UnCuck the Right, an internet sensation that does the same embarrassing parody songs that The Right Stuff is famous for, is presenting at American Renaissance as well, which is again a surprise for a grouping who hides behind avatars.

Instead, Spencer will be joined by former University of California at Long Beach professor Kevin McDonald.  McDonald is known for creating a “unified theory of anti-Semitism” which his Culture of Critique series.  Here he states that Judaism is a “group evolutionary strategy” where Jews use ethnocentrism and high verbal IQ to outcompete Gentiles for resources.  He identifies things like Marxism, Freudianism, contemporary anthropology, Frankfurt School philosophy, and other movements as pseudoscience created by Jews to destroy Western identity and therefore come out on top.  McDonald was a well regarded evolutionary psychology academic before going off the deep end, and now writes for various white nationalist publications like the Occidental Quarterly on the need to reclaim ethnic nationalism and avoid what he calls “white altruism.”  Over the last year he has been doing speeches and interviews about the “origins of the white man,” which he did both at last year’s NPI event and at the Stormfront Smokey Mountain Summit.  He is working on a book on this theme, where he butchers anthropology in an effort to create a “history” of white people as a monolithic and distinct history.  Here he resurrects a strict racial taxonomy, one that has literally no place in contemporary biology or anthropology, as well as distinct categories from the early 20th century like “nordics.”

RamZPaul will join the two, who does actually come in similar to the silly format set by The Right Stuff.  He does popular YouTube videos where he decries liberalism, multiculturalism, and “the modern world,” usually with a penchant for bad stand-up comedy.  Over the last couple of AmRen and NPI conferences he has taken on a specific topic to sort of “explain,” though they usually show that he does not have a clear grasp on the concepts himself.  In his recent AmRen talk on the “Dark Enlightenment” he went on to briefly explain critiques of democracy and equality as well as the preference for monarchy, but with all of the platitudes and generalizations it became obvious that he had not been able to understand Nick Land’s work and was generally out of touch with the science and philosophy that movement claims as its own.  At the March event RamZPaul will try to explain what the Alt Right is, which may actually creates some dissonance in the crowd since he is not a strict white nationalist.

Spencer’s talk will likely be one of his usually “if you dream it we can built it” rants, where he talks vaguely about “ideas” and “passion,” yet clearly does not have a political program to support it.  It may be simply to support Donald Trump, who is fawningly supported by the Alt Right.  Spencer himself really pushes a sort of “right Idealism” where by he thinks these sorts of expensive conferences and constant blog diarrhea are comparable to building a movement.  This provides Antifa its greatest opportunity to challenge their existence since all they want, literally, is a platform.  They have no other strategic elements to the movement, and they are hoping that the groundswell from the Donald Trump primary bid will be enough to move to the next stage in their fascist project.

Confrontation at the NPI conference is often difficult since it is usually held in The Ronald Reagan Building in The Rotunda of Washington D.C.  They have been resistant to organizers asking them to cancel the event, and strict security keeps protesters relatively far from the entrance.  What has been seen recently is that the swell of young people has come primarily from people who do not want their identity’s released, so photos and videos of conference attendees is an important operation.  Pressure can be put on the operations of the Ronald Reagan building year round so that when it comes time for NPI to sign its contract, there is already a show that the community will not accept that.  This could be a long-term organizing project for those in the area, but really any organization nationally could take up this campaign to show national discontent for what is happening there.

Below is the contact information for the Reagan Building if you want to make your voice heard about their hosting, but it may make sense to use this information to develop a long-term escalation campaign where community phone blasts, emails, and general mobilization can be done on a multi-month calendar. 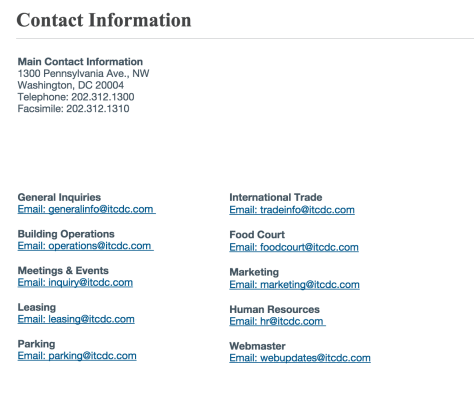