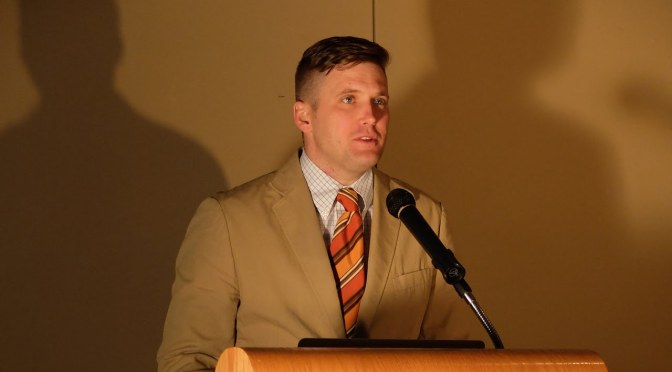 In a recent call in show, conservative radio voice Rush Limbaugh got a call from someone named Roy who asked him about a new brand of the right wing that is straying from older conservatism.  “What I’m interested in, is all this stuff about conservatives being older people,” said the caller. “But I think that’s gonna quickly change. I think there’s a group of younger people called ‘the alt right.’ And it started in the last few years in Europe because of the Muslim invasion. And I think it’s… They’re beginning to get people over here, youngsters between 18, 25, 26, to convert to what they call ‘the alt right.’ I think it’s gonna be pretty intense. I think you should keep an eye out for it.”

Many capitalized on Rush’s response, which seemed happy about the caller’s reference to the rise of the cultural right amongst young people.  As the Daily Shoah mentioned in a following show, Rush likely did not know exactly what he was referring to.  Though Rush has started using the Cuckservative meme to discuss conservatives who do not take up racist immigration policies, he certainly is a part of the conservative beltway that is not only not publicly in favor of this white nationalist contingent, it is probably not even much aware of it.

The term “alt right” was then injected into the Twittersphere as a popular hashtag, spreading around the regular reactionary troll dynamic that links together racist blogs and podcasts using labels like “neoreaction” and “Dark Enlightenment.”  This term lead to Buzzfeed doing a story on it where they interview Richard Spencer about the term, leading him to even do a follow up video to discuss the term and how it is evolved.

Though in anti-racist/anti-fascist circles have certainly come across this as they research the new face of white nationalism and the pseudo-intellectual radical right.  Spencer is the right person to be talked to about this since he, for all practical purposes, coined the term.

In 2010 Spencer had finally left a short lived career in paleoconservative publishing to start Alternative Right.  He was plucked out of a Duke University graduate program after writing an article about the “Duke Lacross Case,” where a group of white male students were alleged to have sexually assaulted a black sex worker.  This was eventually picked up by the American Conservative, a publication started by Pat Buchanan, and came on as an Assistant Editor.  It has been alleged that he was eventually fired when his racism came to light, but he could have left on his own accord, and went to the further-right web publication Taki’s Magazine.  In his time there he continued moving further to the right and consorting with groups of people on the fringes of “acceptable” conservatism.  Through this became friends with people like Paul Gottfried, American Renaissance’s Jared Taylor, Human BioDiversity proponent Steve Sailer, and a whole host of other people with “heretical views” who all tried to cram into the creases of CPAC.

He then created the web publication Alternative Right, a term he started using in 2008, to bring together all of these different groups of people who were dissenting from Neoconservatism and the Washington Consensus.  These would include white nationalists, “race realists,” radical traditionalists, folk religionists, right Rothbardians, national anarchists, and so many more, all of which took on radically dissenting views from the conservative movement and the GOP.  The publication became a “go to” spot for a new type of white nationalism, one that took its queues from French and broad European intellectuals, looked towards ideas like Eurasianism and Metagenetics, resurrected philosophers like Oswald Spangler and Ernst Junger, and generally coalesced around a disdain for the “modern world.”  They often opposed the Iraq war, environmental destruction, and were critical of American Christianity.  The publication certainly had name people writing for it, such as VDare founder Peter Brimelow and, later disgraced, Heritage Foundation Fellow Jason Richwine, as well as new, openly racist commentators like Colin Liddell.  He started Vanguard Radio as a regular podcast for the website, which featured people ranging from Pat Buchanan to Jared Taylor.

Greg Johnson, editor of the neo-fascist Counter-Currents Publishing, wrote as then editor of the white nationalist Occidental Quarterly, that the alt right banner is bringing together a wide variety of people who are forced out of the mainstream and could benefit from the comfort of one another.

Spencer eventually moved over to take the reigns of the National Policy Institute, a white nationalist think tank, and start the website and publication, Radix Journal.  After continuing to do the podcast at Alternative Right for some time, he moved it over to the Radix Journal podcast, and even pulled the domain for the original Alternative Right website.  This create some animosity with between Spencer and the two co-hosts of Vanguard Radio who had taken over editorial duties of Alternative Right, but they went on to create the New Alternative Right to keep their progress going.  Spencer has gone on to make Radix Journal a white nationalist hot spot, as well as the yearly National Policy Institute conferences, one of which caused him to be deported by the Hungarian government when he tried to do a pan-European event.

Spencer has largely walked away from the term alt right simply because his politics, and those he semi-leads, have specified a bit and he feels that the moment that term inhabited is somewhat over.  Instead, the term has taken on a life of its own in that it represents a certain sphere of nationalist politics today.  From the Right Stuff to Counter-Currents, the “alt right” now often means an internet focused string of commentators, blogs, Twitter accounts, podcasters, and Reddit trolls, all of which combine scientific racism, romantic nationalism, and deconstructionist neo-fascist ideas to create a white nationalist movement that has almost no backwards connection with neo-Nazis and the KKK.  As Spencer often said, they had a “different starting point” than conventional conservatism, often coming from their disavowal of human equality.  It is an easy way of differentiating them from older forms of white nationalism that they feel they have no cultural affinity for.

Much of what distinguishes the alt right is aesthetics, education, and language choices, while the core ideas remain the same.  They maintain traditional racism and anti-semitism, a strong sense of gender roles, a traditionalism about behavior, and a necessity towards national identity, though there have been some acceptance of queer members and a move away from strict Christianity and towards Nordic paganism and the Radical Traditionalism of Julius Evola.  This broad sphere is attempting to reclaim an intellectual, spiritual, and social movement for the far-right, and, except for some exceptions, they like to couch their language in intellectual double speak rather than just stacking racial slurs.

In recent weeks the alt right hashtag has started trending mainly because of the concerted effort of many of the disparate trolls forcing it to do so, but it needs to be seen in exactly the context it exists.  This is old-school racism and neo-fascism, except looking to wear a suit and tie rather than a white hood.  As Neoconservative David From said about them, they are
“going to be white nationalists, but, by God, they’re going to be a little fancy about it.”  The attempt here is to rebrand neo-fascism as something new and hip, which has worked in some circles, but it needs to be recognized and treated as exactly what it is.

While the alt right would broadly be opposed to electoral politics, over the last couple weeks the use of the #altright has been to post constant fawning tributes to Donald Trump.  His recent insulting jokes towards a Jewish audience, claims to ban Muslim immigration, and general attack on minorities has mobilized digital reactionaries to broaden their umbrella to include support for Trump.  This is less for his ability to actually win an election and do anything significant politically, but for his ability to generally unleash the subdermal racism in the country that they can then use to mobilize more to join the broader alt right.  This kind of entryism has a real history of success as Trump represents a 2015 version of the 1964 Barry Goldwater campaign, which helped push conservatives to the right and flood in open white nationalist organizations for the next couple decades

The alt right itself is going to stay the mark of the 21st century’s more intellectually minded and diverse neo-fascism, one that is more willing to sacrifice much of the baggage of older white nationalism so that they can create a movement that undermines the basic values of democracy, equality, and the “enlightenment.”  Understanding this new branding gives anti-fascist the tools to confront the new kind of fascist movement that is going to vie for power in times of crisis and turmoil.