Today, Anonymous finally released the Ku Klux Klan membership names and info that they had promised for weeks. A few days ago there was a false alarm, which named a number of national politicians as members. Now the complete list has come in and is showing just how “diverse” the KKK rolls are today, and how many Klan organizations and locals there really are.

The list itself is actually more work than we had anticipated, with a lot of explanation of how many Klan organizations there actually are, what city and state each are in, and links to private social media and internet groups.  The list itself seems pretty well supported and is unlike the previous “leak,” with many of the people on here being known from public racist actions and violent crimes.  Anonymous activists state that the investigation itself took eleven months and took on both their hacking operations as well as journalistic sources like public records, interviews, and surveillance.  They especially note the crossover between Klan and neo-Nazi groups, as well as connections to more mainstream radical right organizations.  They have gone to great lengths to investigate and include aliases, including things like Reddit usernames(many of which are so ugly and vile that they placed a Trigger Warning before the list).  In terms of details, there are a lot, including personal information about where members went to school and who their close relatives and associates are.

This list will likely be the targeted roster for people doing ongoing anti-fascist and anti-racist work to start and remove this type of racialist movement from their community.  Let’s hope that organizers move past just going after obvious targets like the KKK, and we move to collectively target racism as it occurs in most communities.

Here is the list that was put on paste-bin, in its entirety. 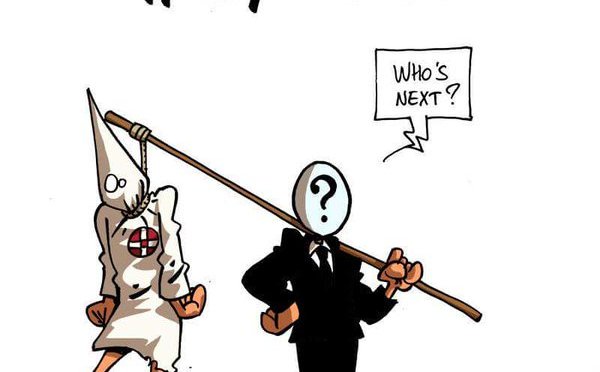 As of today, November 2nd 2015, Anonymous has revealed a couple of lists of KKK members as a part of their #OpKKK project.  This is something they began after the KKK support of Darren Wilson during the Ferguson Uprising, and they are following through on their word.  They have previously released the names and information of Klan members, but as of today their new project has had two releases.

The first release had the names and personal information of a number of high profile members of the KKK such as Stormfront founder Don Black, and the now deceased founder of the Liberty Lobby, Willis Carto.  This information is likely going to be useful to anti-fascist organizers in the future because it includes such sensitive information.

The second major release includes the names of major politicians, including senators and the mayors of major cities.  This has created a huge uproar, as many of these politicians are behind far-right racial politics such as border restriction, voter ID laws, and opposition to #BlackLivesMatter.

This is surprising for many of these politicians, not the least of which is Lexington, Kentucky Mayor, Jim Cray.  Cray is the first openly gay Mayor of the city, and he has gone publicly saying that he is against the Klan and the allegations are baseless.
4.Ocala,Florida Mayor: Kent Guinn: age 60: Wife Sandra Guinn: both living in ocala,florida: Known KKK Affiliated Group: Traditionalist American Knights of the Ku Klux Klan

The list of high profile members is especially telling as the list is made up of well known neo-Nazis, racists who try to explain that they aren’t a part of that violent “Klan” movement, and a lot of historians and adjunct professors.  People who are on here include American Renaissance’s Jared Taylor, former filmmaker and American Freedom Party Presidential Candidate Merlin Miller, and Traditoinalist Youth Network organizers Matthew Parrot and Matt Heimbach.  There are surprise members like the founder of the League of the South, and no-so-surprising members like members of the Council of Conservative Citizens.

We are waiting for the big reveal of names and information on November 5th, 2015, and Anonymous’s video shares more info.

The high-profile KKK members they released are(Click here for complete list of information that Anonymous put up, including addresses and phone numbers):

-Karen Cooper: 40s (the token black for VAFlaggers, we are not fooled)
http://mhconstitution.com/2013/10/01/northern-racism/