With the recent Sacramento anti-fascist action confronting the Golden State Skinheads and the Traditionalist Youth Network still in our minds, it is critical that the community continues to rally in support of those who put themselves on the line.  After many of the neo-Nazis stabbed several protesters the police ignored the clear violations from the fascists and leveled ridiculously inflated charges against several protesters involved.  There has been fundraising efforts to support those targeted since the beginning, and now many organizations are coming together to do their own fundraising events to contribute to these efforts to fund medical care and fair legal representation.

Rose City Antifa and the Portland chapter of Anarchist Black Cross, both of which are known for their long-standing commitment to anti-fascist organizing, have put together a fundraising concert to raise money to send down to Sacramento and to further fund the “postcards to prisoners” program from Portland ABC.

According to their listing:

Benefit show co-sponsored by Rose City Antifa and Portland ABC for The International Day of Solidarity with Antifascist Prisoners!

-Proceeds go to Sacramento Antifascists’ medical and legal expenses!
-Postcards to Prisoners Table to fill out postcards to antifascist prisoners around the world!
-Awesome local bands!
-Fly merch to show your support!

More about the International Day of Solidarity with Antifascist Prisoners:https://nycantifa.wordpress.com/2016/06/21/july-25-2016-antifa-prisoners/

The Traditionalist Youth Network and their leader Matthew Heimbach’s attempt to fundraise on their massive loss in Sacramento has been shut down by a massive show of pressure by anti-racist community organizers.

The Traditionalist Youth Network and their political wing, the Traditionalist Workers Party, linked up with neo-Nazi skinheads and KKK members throughout California to have their rally against multiculturalism in Sacramento. TradYouth, which often tries to act as a working-class oriented Alt Right organization, likes to mask its fascist ideological roots. This rarely works since it shares members with the Golden State Skinheads and Sac City Skinheads as well as various neo-Nazi and Klan groups.

The event was shut down when hundreds of anti-fascist protesters arrived, canceling down their event before it happened, forcing their permit to be voided, battling them out in the open in a large street action, and chased the NAzis out of the park. In response, TradYouth started stabbing people.

Afterwards, TradYouth claimed “victory” even though their event was shut down and they were publicly beaten and humiliated. They then continued to fundraise through PayPal, asking supporters to give money to the Traditionalist Youth Network LLC. This fundraising effort was shared on neo-Nazi and Alt Right websites while they went on social media calling their members “Spartans” who went up against Antifa.

This plan violates PayPal’s terms of use, which says that they will not support any racialist or terrorist organization. We published an article asking supporters to call in and email and ask PayPal to review their account and cancel their fundraising effort. By Any Means Necessary (BAMN) sent a powerful public message that PayPal heard, and the company listened.

On Tuesday, TradYouth announced that they had their account blocked and were unable to receive donations. When someone attempts to use their fundraising link a warning comes up and lists that the recipient was unable to receive payments.

This is a major victory, one that follows the strong showing of community power this last Sunday. Cutting off their line of funds is an important part of stopping the violence that they spread and their attempts to threaten and intimidate communities of color.

Click here if you would like to give support to the anti-fascist protesters injured by the attack in Sacramento. 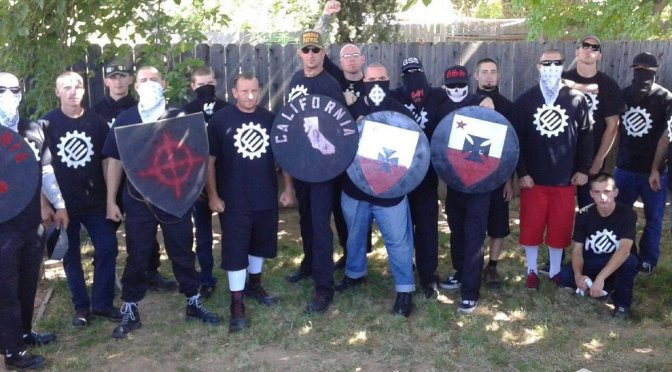 After the Traditionalist Youth Network, Traditionalist Workers Party, the Golden State Skinheads, and various KKK members and neo-Nazis rallied in front of the California Capitol Building on Sunday, the anti-fascists in the crowd swarmed them in ways they couldn’t have imagined. Before they were even confronted directly, one of the Nazis stabbed an elderly woman who was doing nothing more than yelling. As they were shut down and had their members humiliated, they began stabbing anti-fascist protesters, sending several to the hospital.

Even though their members almost all left broken and bruised, and their meeting was not allowed to happen, the Traditionalist Youth Network are continuing to “claim victory” for stabbing people. Matthew Heimbach, their leader, often prided himself on “fighting fair,” yet this act of stabbing protesters and then hiding is one of the most shameful in their sordid history.

Using this rhetoric, the Traditionalist Workers Party/Traditionalist Youth Network is using this act of putrid disgrace to fundraise for their nationalist aims.   Alleging, still, that they are a “peaceful” ethnic nationalism, TradYouth is asking that supporters use this opportunity to send money to their PayPal account.

We delivered the message we intended to deliver today; We will not be intimidated. We will not stand down. Our event was a victory by all metrics. We won the physical fight. We provoked the leftists into showing their true colors. The national media story about our event is becoming a conversation about how our attempt to peacefully demonstrate was viciously attacked by the leftist mob.

Christians, pagans, and skeptics marched as one today, fighting and winning as one. Workers of all professions battled side-by-side. High school dropouts and the college educated stood their ground against what was the single greatest show of anti-white force ever organized in America…and won! Today was not only a victory against the forces of the Left who wish to exterminate our people, but against the voices on the Right who would divide our cause up by religion, class, and background.

No clever “metapolitics” can work around the fact that our enemies want us dead. While blog posts and social media debates are excellent work for our cause, they’re not a replacement for men who are willing to risk injury or even death to guarantee that our message is heard and our voices are not silenced or marginalized. I was not out there today and neither was Matthew Heimbach. We fully trusted the leadership of our California chapter and GSS to host a successful event, and they succeeded against staggering odds. We all owe them a tremendous debt of gratitude.

But we also owe them a real financial debt, as well.

The fact that PayPal is still allowing them to do business, even though they are technically an LLC, is surprising. PayPal has shut down funding to a number of nationalist organizations, such as the Daily Shoah podcast and National Youth Front, the organization that was later rebranded by Nathan Damigo as Identity Europa. Neither of those groups, as disgraceful as they are, have ever engaged in the type of racist violence that Trad Youth has now displayed, yet Matthew Heimbach is continuing to raise money using PayPal.

The Donation link on their page takes you to pay directly to the Traditionalist Youth Network, LLC, which does not have the protections of a non-profit organization. It is time to let PayPal know that Trad Youth is using their service to fund a violent terrorist movement, one that stabs protesters when their event gets shut down.

We need to contact PayPal’s Customer Service center collectively and let them know that a violent neo-Nazi organization, which is easily provable with public information, is trying to use PayPal to raise money.  You can either email the report in at aupviolations@paypal.com, or you can go to their Customer Service center here to do a direct email or a phone call.  We recommend doing both if you have the time.

When looking back at the event, it is delusional that they are claiming victory today. They were not able to recruit, almost all of their organizers were chased out with force, and they were made to look like the degenerate fools that they are.   This is attempt at spin will not work simply because the KKK and neo-Nazis skinheads have so destroyed any public media game they could have had with their persistent and cartoonish violent racism.

What the action in Sacramento really displays is that anti-fascists are growing in numbers and increasing in militancy. This has come in response to the growing threat the Alt Right and the rest of the neo-fascist movement presents, and is one that has to be shut down at every chance.

If sending an email, feel free to send along a link to some of the articles below to give them a better idea of who this group is and what they have done.

Email us at AntiFascistNews@gmail.com Submissions should be relevant to anti-fascism/anti-racism and deal with contemporary or "evergreen" issues. Put "article submission" in the subject title, and ideally you will include the submission as a Rich Text or Word document. We publish a range of article lengths, and are open to diverse styles, so send it in! We should be able to respond to every article submission. Also email in questions, comments, or if you want to volunteer to work on the website or other technical tasks.
Loading Comments...