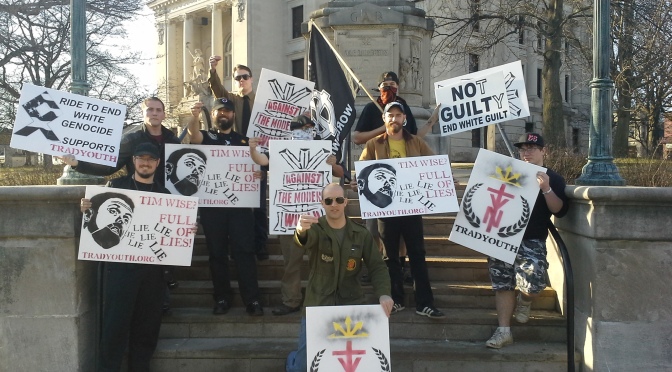 If the rhetoric of the racist right is tweaked at the edges, with the sharp language about minority groups shifted towards a broad discourse of “white dispossession,” then it can easily go under the radar as coded racial attacks are common to Tea Party groups and Donald Trump rallies.  As we see an anti-racist movement with teeth evolve out of Black Lives Matter, many whites are taking the calls of a combed-over Fuhrer figure and feeding the darkest recesses of their reactionary impulses.  It is in this wave of Islamophobia, “all lives matter” retorts, and increasing racist violence, that the Traditionalist Youth Network has gone under the general public’s radar. 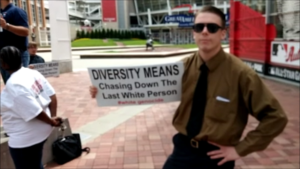 The Traditionalist Youth Network and its political wing, the Traditionalist Worker Party, has been hitting the streets in a series of actions where their message has gotten through by being disconnected from their open white nationalism.  In a recent action in Cincinnati, Ohio, Trad Youth picketed outside of the Great American Ball Park to highlight the attack on Christopher McKnight.  McKnight had recently been attacked by a group of people who beat him pretty severely, all of which was caught on camera phones and posted on YouTube.  The reason that Trad Youth became interested in this case was that McKnight was white and the attackers were black.  They then wanted to call attention to the fact that one of the filing police officers who addressed the case had briefly considered filing it as a “hate crime,” even though there is no credible instance that the attack was racially motivated.

Trad Youth’s action garnered a great deal of publicity, and a lot of people they passed were sympathetic to the “heartland” rhetoric they laced their argument with.  The news reports never mentioned their close neo-Nazi and Ku Klux Klan relationships, nor their open fascist political program.  Trad Youth also does not invite these comparisons as they kept their language incredibly limited when dealing with the crowds that poured past them.

Over the weekend of December 5-6, the Traditionalist Worker Party joined the Madisonville, Kentucky Christmas Parade complete with their Fallange inspired political signs.  Here they passed out hundreds of candy canes to the children of the town with messages that read “Local Solutions to the Globalist Problem.”  This is a very particular choice in wording as they play on the “go local” language that is often used in small towns around the holidays where small businesses are trying to stay afloat against big box competitors.  The real key to this line is “globalist,” which is a particular framing that is key to their conception of nationalism.  They handed out anti-immigration flyers to the rest of the crowd, which also indicated that they were “pro-worker” since they wanted to keep out foreign workers.  With a general support from the semi-rural, conservative community, their actual political affiliation was never suggested even as their political wing was discussing programmatic solutions.  On their own website, in the discussion about the event, they listed a quote from the Spanish fascist Fallange party founder, Jose Antonio.

Nobody was ever born a member of a political party; on the contrary, we are all born members of one family; we are all citizens of one Municipality; we all press forward in the exercise of one task of work.

Even more disturbing, the Southern California chapter of Trad Youth has been organizing in a coalition with neo-fascist National Anarchist groups to organizing Food Not Bombs.  Usually anarchist in nature, FNB is a project where by the boundaries between those who cook and those who are hungry are broken down and act as a community-building alternative to the traditional soup kitchen.  Often considered an anarchist counter-cultural staple, FNB is an attempt by National Anarchists to co-opt anarchist cultural items so that they can go under the radar as “just another type of anarchism.”  Instead, they believe in a decentralized form of racial nationalism, one where “autonomous” communities are driven by racial identity and traditionalist authoritarianism.  Together, the N-A and Trad Youth also had a sit down meeting with Ron Paul, which continues to show that the left libertarian support for Ron Paul has been a bizarre misstep.

In a continued attempt to wear the shoes of the revolutionary left for a reactionary agenda, Trad Youth and the N-A affiliates formed a four person “black bloc” to defend anti-abortion protesters around the trumped up Planned Parenthood attack.  They note particularly that they were going up against the Revolutionary Community Party, which they use to show that they are utilizing the left’s organizing strategy “against them.”

Further, since one of our national-anarchist members came from a leftist to a traditionalist mindset over time, as he grew from a teenager to a man, he was familiar with the flyering techniques of the RCP and was able to help us locate their flyers they were dropping in the downtown area to invite local drug users and homeless from skid row to a “community meeting” they were organizing in a Methodist church. While we chose not to counterprotest this meeting at that time, having located the flier and considered options to act against them as a group shows the level of discipline we have developed in just a few short months.

The Traditionalist Youth Network has shown itself to be one of the few white nationalist groups capable of even moderate organizing, though they use marginal actions more as a chance to create endless blogs and media rather than as a larger strategy.  Any success that they do have really comes from their ability to adapt to the particulars of the area.  In Kentucky they stick with a traditional rural ultra-conservative messaging, while in California they join the rhetoric of alt-fascism that tries to employ elements of the revolutionary left.  All of this tends to come under the cover of leader Matthew Heimbach’s smiling face, which provides a certain optimism that is very different from the traditional image of racist skinhead anger.

Because they intend to go under the radar in their particular areas and sub-groups, this gives anti-fascists key tools to confront and destabilize their strategy.  In this way it is simply stating the reality of their politics, showing their quotes and affiliations openly, and mobilizing coalitions against any appearance they have.  As we just saw in Seattle with the successful counter-action against Hammerskins from Rose City Antifa, there is the ability to mobilize large actions when people see that open racialism is gaining a foothold.  This fury can be organized with Trad Youth as the target, and the mild community support they have will dry up immediately when they are exposed for what they really are.

Heimbach’s calm demeanor and Christian apologetics will only go so far when the sheet is pulled off of their dog whistle politics and their plans for an Ethno-state is laid bare.

9 thoughts on “A Racist in the Streets: Trad Youth Ramps Up Public Actions”

Email us at AntiFascistNews@gmail.com Submissions should be relevant to anti-fascism/anti-racism and deal with contemporary or "evergreen" issues. Put "article submission" in the subject title, and ideally you will include the submission as a Rich Text or Word document. We publish a range of article lengths, and are open to diverse styles, so send it in! We should be able to respond to every article submission. Also email in questions, comments, or if you want to volunteer to work on the website or other technical tasks.
Loading Comments...
Comment
×
%d bloggers like this: