It has long been said that cops and klan go hand in hand. This holds in Canada as in the US. On Saturday, September 8, 2018, Toronto police provided a personal security detail to ensure that fascists were able to march through the streets of Toronto, the country’s largest and most diverse city. The march was the first of two slated to happen over the first weekend after Labor Day. Groups claiming attendance include PEGIDA, Soldiers of Odin, Wolves of Odin, Worldwide Coalition Against Islam, Proud Boys, Northern Guard, and III%ers, a veritable cross section of neo-fascist and white supremacist groups in Canada. About 65 fascists in total showed up.

Witnesses say Toronto Police Service (TPS) formed a wedge to force through groups of counter-protesters who came to oppose the fascsists. At one point, witnesses report, police punched an Indigenous woman in the face to clear a path for their kindred spirits.

PEGIDA put forward the call under a banner of the memory of 9/11 as the rallying cry for their march. Initial numbers put antifascists at at least 30 with PEGIDA et al at only 10. Cops formed a barrier protecting the fascists. At some point a larger group of 20 fascists showed up, with a dozen or so more joining later, and police moved against the antifascists. Toronto City bylaw enforcement officers supplemented TPS.

Antifascists held ground to stop the march from starting despite the aggressive actions of police. Of note, several non-participant members of the public cheered on the counter-protesters against the fascists. At least one antifascist was arrested on phony claims of assaulting prominent white supremacist Eric Brazeau.  These actions came after a series of confrontations between antifascists and the Soldiers of Odin, the white supremacist anti-immigrant patrol organization that started in the Nordic countries before expanding over to Canada.

It is worth pointing out that TPS actions came only two weeks after some of their members were photographed, in uniform, with neo-Nazi candidate for mayor Faith Goldy.

Just a few days ago, we ran a story about the Traditionalist Workers Party linking up with Patriot and skinhead groups to hold a community event in Charlottesville, Indiana. The event was booked to be held at the city’s Lion’s Club lodge, which looked to be an inside/outside event for the facility. Several Lion’s Club members voiced their outrage about the event, and anti-racists and anti-fascists in the Indiana area, and from around the country, went to work to counter the scheduled event and contact the Lion’s Club International.

The Lion’s Club acted quickly after being notified, putting out a public statement noting that they did not know the nature of the event and that they were canceling it.

The event which you referenced, was not a Lions Event. The Charlottesville Lions Club was given misinformation regarding the event, when someone asked to rent their building.

Once we were all made aware, Charlottesville Lions realized they did not have a contract for this event, and actually the building was double booked.

It is my understanding that the venue has been changed.

Lions Clubs do not condone these types of meetings. They are in direct violation of our Code of Ethics.

Thank you for your concern.

Brien James, the organizer of the event, had to issue a public statement to supporters that they event has lost its venue and is being changed to a private one. This information is no longer public, and you have to message James specifically to get the information. This will all but cancel the event as communication will be difficult and the location will likely end up being difficult to distribute widely. Since it is likely a private residence, there is a smaller likelihood that large numbers will even want to attend.

James found our original article and foolishly commented on it, attempting to distort allegations of the event’s racialist nature.

Come on out if you want. We have nothing to hide. The event is open to the public. There will be people of all races and faiths attending. The 3%ers, SDL, and SOO are all multi-ethnic groups. One of the bike clubs invited is a black bike club. If you are genuinely curious as to what is going on you are welcome to send a representative. If you are just hell bent on looking for trouble you can find that too.

As we reported in the original article, James’ racist organizing and views are well known, as are the organizations involved in the event. No matter what type of posturing he attempts here, anti-fascists are aware of his true intentions.

The canceling of this event is from the direct work of anti-fascists who reached out quickly and organized both an on-the-ground response and those who called in to pressure the Lion’s Club. This is a great show of unity as Alt Right groups reach out to Patriot militias and traditional Nazi organizations, all emboldened by the Donald Trump campaign.

After the Malheur stand-off resulted in one person dead and several of the original militia members facing felony charges, it seemed like the far-right militia movement that rallied around the Hammond family would take a hit.  In recent weeks we have seen them self-reviving, having rallies around Oregon(and around the country) calling for federal lands to be turned over to financial interests like mining and logging.  This has been called the great “second wave” of the militia movement, which was declared dead after a previous generation of its activity culminated in the 1995 bombing on the Oklahoma Federal Building.  Previous raids by the ATF on the Branch Davidian compound in Waco Texas and the earlier intervention on Randy Weaver at Ruby Ridge had started a wave of their organizing, often being founded around deeply racist enclaves like the Christian Identity church and Posse Comitatus. 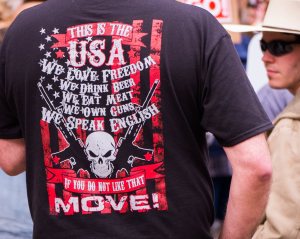 On Saturday, March 5th, supporters of the militias and “patriots” came out in Portland and other cities on a call from the Oath Keepers.  Beyond calling for the abolition of federal land, many are calling for a prosecution of the law enforcement officers who killed LaVoy Finicum.  Many have gone online calling for a “citizen’s grand jury” where individuals are “deputized” to “indict” the people involved in Finicum’s death.  Memes, t-shirts, and signs show an LV logo to remind people of LaVoy, as well as the more common symbols associated with the movement, such as excessive number of American flags and notices including coded racial language.

A small counter protest was organized in support of public land, such as the Malheur preserve that was disturbed by the militia occupation, as well as in support of First Nations tribal land, like the Palute tribal land that was desecrated during the stand-off.

While these coordinated rallies show a sign of both the rise of the radical wing of the “patriot” movement, it also indicates the mainstreaming of many of their ideas.  While there were regular conservative supporters that came out for the openly racist and Nativist core of the movement, there is also a public “land grab” that is happening on the state level around the country.  In Alaska, a legislative committee is going against federal law by assigning 222 million acres of public lands over to the state for dissemination.  The Outdoor Industry Association notes that public land brings in over $646 billion in “economic benefit,” not to mention 6.1 million jobs.  The attempt to take out federal land is not one that would give it further access to “the people,” but instead an ideological war that large extractionist companies would benefit from as they would gain access to land that was considered a part of the commons.  The militia camp sees it as a sign of an overreaching government, which is a point at which lacks even the most basic understandings as to what elements of the state maintain systemic oppression or enable the elements of capital.  The militia instead make up a cultural segment of a growing reactionary core that is protesting progress, whether it is environmentalism, racial multiculturalism, or a multi-religious community.

At the rally in Portland, the police prevented intermingling between the “patriots” and the counter-protesters who were calling for a support for publicly accessible land.  Masked protesters were blocked when running in to confront the militia supporters, though many were allowed to intermingle when being more unassuming in appearance.

“I almost wish you guys critiquing their racism had the “privilege” to show up as a person of color,” said one counter-protester who made their way through the opposing crowd.

It’s the only time I’ve been watched so closely by people and asked in an angry tone over and over “Why are you taking pictures?”, “Who are you with?”, “Where are these going?”, “Why?”. “Why?”, “Why?”. I’ve been asked that question usually once or twice at every event I cover, but never once in an accusatory manner as if I shouldn’t be there, and NEVER as many times as it happened today, not even close. Then there was the revealing moment when they all got so happy because a black guy had waved out his window and honked as he drove by–you should have witnessed all their back-patting and pleasure and excitement that they got from getting their token PoC for the day. It was a strange reaction when he was just one of many that waved and honked with no fan-fare.

One photographer reported being shoved while taking pictures.

The militia movement was set back after their bizarre overreaching at Malheur, but it is a growing player in the far-right that anti-fascists around the country will continue to encounter.