For all its claims of discernment and elitism, the Alt Right will take just about anyone it can get.

We have covered the infamous D-list reality celebrity Tila Tequila in the past.  Several years ago, Tequila seemed to go off the deep end on her own website where she started posting Holocaust Denial rants, admiration for Hitler, and anti-Semitic conspiracy theories claiming that the Jews of today are actually the parasitic Khazar race and not the Israelites of the Bible.  This is one of the more “out there” conspiratorial claims usually made by Christian Identity extremists, and for some reason this bi-sexual Asian woman is now allying herself with the furthest reaches of Nazism.

Her strange love for Hitler has garnered the most attention, with her beginning by posting a picture of herself dressed as a Nazi.  She has posted articles and comments discussing her celebration of Hitler, and as recent as Hitler’s birthday (4/20) this year(2016) she went to Twitter to say that Hitler was the “true king,” her soul mate, that he was the second coming of Christ, and that she was Hitler in a past life.  She went as far as to Photoshop herself into a picture sitting next to Hitler.

In the past she turned her own personal website into a troll farm for far-right Jew bashing, where any criticism was met with the vilest racial slurs straight out of Stormfront.  An example of this would be what she said of reality TV director James Marcus Howe, where she hurled the kind of insults you never would have expected.

GOD SEE’S(sic) YOU DIRTY FUCKING KIKES WORKING FOR THE SYNAGOGUE OF SATAN AND I HAVE RETURNED AS HIS MESSENGER!  TAKE HEED NOW BITCHES!

She often responded by calling people Jews and Kikes when commenters said she was being racist or attempted to point out that Hitler would admonish her for her bi-racial background.  She was eventually dropped from the reality show Big Brother in 2015 because of her pro-Hitler politics.

Over the years it has not gotten much better for Tequila as she desperately raises money online to pay rent and takes almost any appearance job she can get.  She came back into the news recently as she went on Twitter to say she also does not believe the earth is round, and that she joined rapper B.O.B. in calling NASA “globalist shills.”  The idea here is that NASA are a part of the anti-nationalist “new world order” that is destroying our racial and cultural identities with lies like the spherical Earth.  She has also roundly endorsed Donald Trump, which is an endorsement even the Trump campaign was not likely looking for. 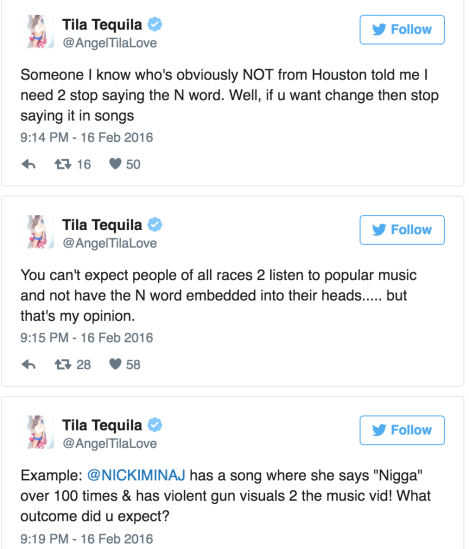 Her anti-black racism has also garnered gossip recently as she continues to go on Twitter and say vulgar racist things about black people.  She has said that “blacks” pray to their “fried chicken God,” that the “coloreds” shop at Wal-Mart, and various other mockeries of having “affirmative action friends.”  It didn’t help when Radar Online revealed a text message she sent to the father of her child that read “Your daughter Briana is dating a n***er…why is this so prevalent in your family?”  She spends much of her time on Twitter tweeting at black artists asking why she isn’t allowed to use the N-word.

In an effort to one up herself, she has now appeared on one of the most popular white nationalist podcasts in the world.  Fash the Nation is the political podcast from The Right Stuff, the parent website of the Daily Shoah podcast.  It has now eclipsed the Daily Shoah in popularity, mainly because it spends three hours pretending they have a good grasp on American politics.  The podcast mainly discusses Donald Trump’s candidacy, but the hosts usually devolve into racist name calling and Trump worship, and it is clear that they are out of their league when it comes to even the most basic political analysis.

They occasionally have guests, and even an interview once in a while, and that is where Tila Tequila came in.

Many people might say that she would not know exactly what Fash the Nation was exactly, but right from the start it became clear that she not only knew what it and the Alt Right were, but she was also sympathetic.  While she labeled herself as Conservative, she said she was moving in the direct of the Alt Right.  She said that she was previously unaware of what was “really going on,” and then left Hollywood for Texas and began “trolling” online with conspiracy theorists.  She met Alt Right people online and then found that her community in Houston were reflecting what Alt Righters said, where non-white immigration had turned her neighborhood into an “unsafe ghetto.”

It seriously looks like a third world country out here.  And its not fair because my parents actually worked really hard to become, you know, middle class people…crime has really shot up, and it has turned really ghetto.  I can’t even take my daughter out anywhere without worry about, and then I have to think about, ‘ok, what areas can I migrate to to take her to a safer area.’  We shouldn’t be kicked out of our neighborhoods.

They avoided the fact that she was from an immigrant family, just like the immigrants she was blaming.  In reality, crime has not risen dramatically in the immigrant areas of Houston and the increases in crime rate that do happen are directly correlative to income inequality.

It’s like they have taken Section 8 housing people and spread them into nice neighborhoods, to be equal, or whatever.  And its not cool because, sure, everyone deserves a chance to have a good life, or whatever, but its just not safe to mix certain types of—

She stopped herself in the middle of saying Mexican, which is again, strange given her own non-white ethnic background.  She repeatedly talked about how she was often the only “light skinned” person in these dangerous neighborhoods, and how she worries for her daughter’s safety anytime she was near dark skinned members of the community.  Most of this came with stuttering rants, barely coherent in their embarrassing fragments.  For an Alt Right community that celebrates elitism, this has to be the bottom of their own barrel.

They spent a great deal of time talking Donald Trump, where she supported the candidate’s plan to build a wall since “there are a bunch of invaders coming into our country.”  Her and the Fash the Nation hosts discussed the allyship between whites and Asians, who white nationalists often consider to be “second to whites” because of a perceived high natural intelligence.  They still say they don’t want a great deal of Asian immigration, which Tila agrees, saying “we didn’t come over here [to the U.S.] to bring the third world with us.”  The hosts do their best to keep Tila on their racist track, moving to international refugee policy.

While it may seem confusing for a neo-fascist podcast like Fash the Nation to have someone like Tila Tequila as a guest, especially since she is non-white, non-heterosexual, and having worked as a sex worker, it is part of their program.  What it shows more than anything is that these ideas are not just isolated t0 a white core, but can have allies throughout the culture.  It also shows the willingness by people on the Alt Right to pull any celebrity in that could possibly connect to their racialism, even if they are barely literate reality stars who think the Earth is flat.

Note: It should be noted clearly that we think there is nothing shameful about sex work, and believe that it is both “real work” and something that should be respected and defended.  The irony, however, is that those at The Right Stuff, the Daily Shoah, and Fash the Nation do not agree, and instead see sex work as decadent degeneracy.