A big thanks comes to Heathens United Against Racism, who did a large amount of research for this article.

The reframing of Syrian refugee migration into Europe and the United States is critical to the messaging of the racist right-wing.  Instead of seeing these as rightful refugees of an incredibly violent, war-torn region, they are instead painted as “invading hordes.”  The dehumanization of these immigrants of color is obvious, but it is also an effort by Alt Right voices to reframe the discussion in terms of their own interpretation of pre-modern tribal norms.  The term “hordes” inspires the listener to immediately apply “barbarian” to it, which inclines them to think in an “us and them” mentality.  The idea here is to begin thinking of people of European ancestry, specifically Northern Europe, as a distinct “tribe” with its own interests.  This is opposed to the universal morality that sees actions within the same moral framework whether they happen to someone of a similar ethnic background or someone from a distant country with different customs and religious practices.  To see the refugees as “invaders” is to then see the need to protect the “tribe” from the immigrant populations that you are absolved of the responsibility to care about.

This shift in perspective plays directly in the new Soldiers of Odin phenomenon, a group of people who are trying to “defend” European nations and the U.S. from these refugees.  Playing on fallacious notion that the refugees are responsible for increased rates of crime and sexual violence, they have created an impetus that street vigilante action against non-white people is necessary.  The “Odinic” reference is also key as Odinism/Asatru, as a resurrection of the ancient Nordic pagan religion, is often interpreted racially, using the pseudoscientific concept of “meta-genetics” to say that the Nordic Gods are literally a part of the psyche of people deriving from Northern Europe.

The Soldiers of Odin were created in Kemi, Finland in October of 2015, towards the beginning of what is now phrased as the “refugee crisis.”  This was created to be a street gang that would patrol areas with asylum seekers, often appearing as a motorcycle gang or mirroring white tribalist groups like the Wolves of Vinland.  The founder of the movement, Mike Ranta, was close to the nationalist Finnish Resistant Movement, as well having a 2005 conviction for a racist attack that injured two victims.

The group’s dynamics of racial violence seem obvious, but they have grown over the last five months, creating locals all over Europe and moving into several places in the United States.  The process began by creating multiple Facebook groups, all with lax security protocols, that have open racialist understandings of who the “invaders” are.  Even with this white nationalist slant, the growth of these groups has been incredible and the numbers of people unaffiliated with the racialist movement at large has been striking.  Large numbers have been coming directly from the Odinist/Asatru movement, even beyond the explicitly racialist forms.

Among these new groups is one for Colorado, with members running the gamut.  This includes the Gothi, or clergy, of the Eagles of Yggdrasil, a folksih heathen kindred.

Canadian locals have popped up with common membership, indicating that there is likely less local organizing happening as much as a few enthusiastic metal-head racists who are creating these groups for different regions in the hopes that it will spark some growth.  The blog Anti-Racist Canada has reported on this growth, noting that the nativist Canadians United 4 Canada have begun to ally with neo-Nazis in the Soldiers of Odin project.  Charlene O’Farrell, who started that group on Facebook, has posted long diatribes in support of the Soldiers of Odin to start “protecting Canada and us(sic) women, children and even men who can’t defend themselves from being attacked or rapped(sic) if this should happen here in Canada.”

Dave FightingBack, a Facebook name, has also been a high profile member organizing in Canada, known for neo-Nazi connections, has sent back the kind words to O’Farrell.  Anti-Racist Canada further exposed several of the SOO organizers who were sporting neo-Nazi tattoos and images, Confederate battle flags, and “seig heiling” in various social media posts.  Several of them are members of known skinhead gangs, affiliated with Blood and Honor “white noise” music networks, and sporting Rock Against Communism and Totenkopf t-shirt images.  This includes one SOO organizer, Kory Knowles, who, among being friends with O’Farrell, is also friends with open Creativity Movement followers.  It would appear that, at least in Canada, the SOO movement is almost entirely run by neo-Nazi skinheads looking for a political crossover, and the crossover between them and Canadians United 4 Canada has led many open neo-Nazis to now be made admins of the Canadians United 4 Canada Facebook group.

Now the Soldiers of Odin have organized a “meet-up” event for those interested in their racist organizing project, one that is not a public event and instead a private gathering dedicated towards furthering organizing projects.  In California, a meet-up is planned for April 30th at Lodi Lake Park, in Lodi, CA.  Topher Justis, one of the U.S. Soldiers of Odin organizer who has been active online, seems to be one of the key organizers of this. 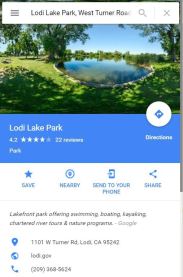 In an effort to call attention to the racial violence that is embedded in the Soldiers of Odin project, as well as to demoralize their plans, this would be a great event to have an anti-fascist contingent attempt to attend and counter-protest.  If you would like to go under the radar, you could also attend and send in a report back that could further aid anti-fascist counter organizers to give inside information on plans, specific organizers, and hard information.