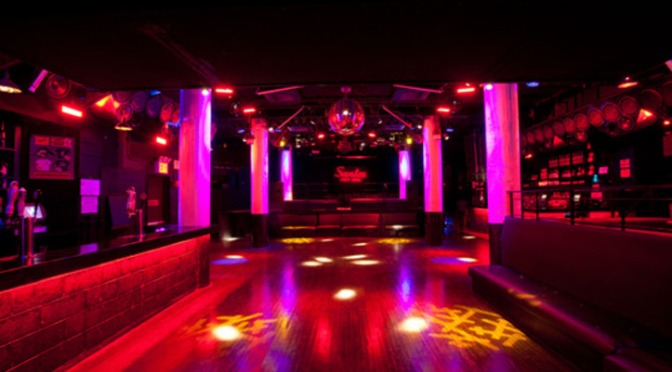 Feeling the force of antifascist pressure from NYC Antifa and others, the Black Bear Bar in Brooklyn finally decided to cancel the Oi!Fest 2016 skinhead concert they were hosting.  The bar had provided cover to the neo-Nazis organizing the concert, just as they did previously by supporting the neofolk Operation Equinox tour, using the few multi-racial members of the skinhead bands as a cover.  As people have noticed, this group of nationalist skinheads have reached out to nationalists of color to create a more “multi-racial” fascist subculture, and one that often confuses those looking for traditional racial separatism.

It was this multiracial character that Black Bear used to defend themselves as antifascists descended on their social media.  On Facebook, they spent all evening defending themselves against allegations of aiding Nazi gangs.  People from around the country, but especially New York, posted on there, sharing stories of Black Bear regularly supporting “Rock Against Communism” shows and using traditional Nazi insignia in the bar.  The bar repeatedly tried to point to Asian and Latin American members of some of the bands as proof that this was a non-racist skinhead show, yet members of the community immediately posted information about neo-Nazism in Latin and Asian communities that they were attempting to create alliances with.

In a recent article, the Southern Poverty Law Center took a special look at the inclusion of people of color in this otherwise racialist scene .  They pointed out that many of these street fascist movements, which this brand of skinheads inhabit in the United States, have had several attempts to “rebrand” themselves using a tenuous multi-racial alliance.

From the 1980s to the mid-2000s, the dominant brand within the far-right sector of skinhead subculture was neo-nazism, and such interracial co-mingling would have been unthinkable. In truth, there have always been skinheads of varying degrees of “whiteness” across the world who have sought to uphold strains of far-right politics.

A prime example of how race is falling away as the dominant organizer within the extremist skinhead music scene occurred in 2013.

Bound For Glory, one the first neo-nazi skinhead bands to emerge here, toured Japan with Aggro Knuckle, one of that country’s oldest skinhead bands. The two also released a split-record together. In that way, NYC Oi! Fest is an important microcosm of the landscape of “hate music” worldwide. Last year’s installment brought bands to New York City from as far away as Finland and Mexico.

“Oi,” after all, encapsulates a broad range of skinhead-oriented punk and rock ‘n’ roll. Most Oi! fests and concerts book bands who offer little-to-no political overtones or messages. Their songs and the shows themselves often revolve around drinking and other subcultural markers, like banal expressions of patriotism. By inserting “Oi!” into its title, the fest’s promotors –– Dennis Davila of United Riot Records chief among them –– are putting forth their version of what skinhead identity and music should exist as, while directing hostility towards outsider and those they “other.”

There is, of course, historical precedent for this. Efforts to reframe skinhead identity and music were first undertaken by the neo-Nazi political party National Front in England in the early 1980s. The efforts of those organizing NYC Oi! Fest –– a long-standing crew calling itself the 211 Bootboys, of which Davilia is a member –– aren’t wholly dissimilar from the National Front’s attempts to attract skinheads to their worldview.

They go on to outline the violent homophobic and nationalist lyrics of bands in the Oi!Fest line-up, including Brassic.  They have allowed Nazi skinhead crews to make Oi!Fest an annual meet-up point, and bands like Brassic have had explicit Nazis set up their shows around Europe.

Anti-fascist writer Spencer Sunshine outlines the complicated nature of these seeming “multi-racial” alliances that we are seeing in this skinhead event, as well as in circles like National Anarchism and radical traditionalist circles.

Today, neo-Nazis and the Ku Klux Klan are no longer the only groups that endorse White separatism. This is partly due to the secessionist fever that has spread across the U.S. Right, uniting Right Libertarians, conspiracy theorists, Christian theocrats, Sovereign Citizens, neo-Confederates, and traditional White separatists. New groups advocate “pan-secessionist” ideology, and seek to unite the right-wing secessionists with those traditionally closer to the Left, like (bio)regional separatism in Vermont and Cascadia, former Leftist Kirkpatrick Sale’s decentralist Middlebury Institute, and nationalist organizing by those who, in the old anti-imperialist terminology, are “oppressed nations” (Native Americans, African-Americans, Latinos, and other people of color).

However, the most contentious question today is the direct participation of people of color in groups that espouse White separatism as part of their ideology. Loosely organized groups like National-Anarchists, Attack the System, and New Resistance, which actively embrace White separatism as part of their decentralized schema, should be excluded from progressive circles—including people of color who are members of these groups.  This also includes members of groups that are multi-racial, but which promote this political view.

In addition to these groups, some people of color are involved in openly fascist circles. Neo-Nazi groups are active in countries such as Brazil, Chile, Mexico, Colombia, Mongolia, and Malaysia; and members of these movements reportedly have ties in the United States.

In the past, Leftists excluded White people affiliated with groups that espoused White separatism, such as White Aryan Resistance (WAR) and Aryan Nations. But this new secessionism is more complicated; for example, it has led to the spectacle of people of color advocating for the legitimacy of White separatism—by claiming either that all separatism is good separatism, or that a program of complete reciprocal racial separatism requires that all groups have their own geographical enclave.

Cooperation between racial separatists of differing backgrounds is a long-standing tradition. In the 1930s, when Mississippi’s arch-racist Senator Theodore Bilbo publicly called for the expulsion of African-Americans to Africa, members of Marcus Garvey’s movement (themselves proponents of African-American emigration to Africa) approached Bilbo as a potential collaborator. The Nation of Islam (NOI) also has a history of associating with White nationalists, including the Ku Klux Klan and the American Nazi Party; Malcolm X cited these associations as one of the reasons he became disgruntled with NOI. WAR’s Tom Metzger has supported and donated money to NOI and has addressed the New Black Panther Party (NBPP). In Florida, one Black separatist organization even held joint demonstrations with a local Klan group.

However, calling for the exclusion of all supporters of White separatism should not be mistaken for a call for progressives to exclude activists who endorse nationalist forms of separatism for people of color, including Black, Native American, or Latino nationalists. It is only the advocacy of White racial separatism that is at issue. While the acceptance of what is called the “right to national self-determination” of racial and ethnic minorities as congruent with larger left-wing goals is not without its critics (including myself), it has a long-established history on the U.S. Left, and its advocates have included the Black Panther Party, the American Indian Movement, and the Young Lords. However, irrespective of the debates around it, national self-determination by an oppressed group of people is completely different from the “right” of White separatism. White separatism has never had a place in the Left, and its structural function is to reinforce—and not attempt to escape (regardless of whether this would work in practice or not)—existing social hierarchies. In the United States, White people as a group are firmly in control of the majority of economic resources and social power. White separatism is comparable to espousing gated communities for the rich: its purpose is to physically express existing hierarchical social and economic structures.

This type of alliance is something that white nationalists in all circles are going to continue to try and pull from in an attempt to show that “fascism is for everyone.”  Even the most recent American Renaissance conference had a Mexican speaker discussing racial nationalism, and they occasionally post that they have Latino participants in their crowd who are there advocating for their own racial separatism.  Japanese nationalism, often tied to romantic notions about Imperial Japan and national Shinto, is a special favorite for this crowd, and often is used by white nationalists as proof that they have a coherent ideology that is not just a vessel for angry bigotry.  There are very few people of color associating with these white nationalists, but it is a rhetorical strategy that has helped to neutralize opposition who are not aware of these strategic developments on the far-right. 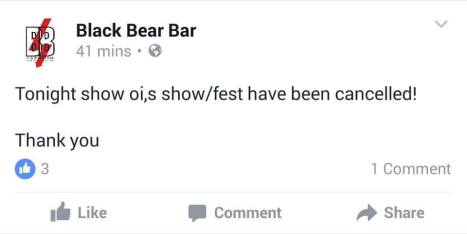 Black Bear eventually went to Twitter to announce that the show for Sunday, May 29th had been canceled.

The show is actually being moved to the Santos Party House, having just been announced at 3:30pm EST.   That venue is co-owned by rocker Andrew W. K, who very well may not know what is going on. Fascists are hoping that the antifascist opposition will miss this news, but with a growing contingent in New York City looking to shut it down it will be hard for them to hide.  NYC Antifa will be calling for a boycott of Santos Party House if the show is successfully held there.

Contact them and let them know what you think!

Also let Andrew W.K. know what is going on!

Big thanks to NYC Antifa for all of their research and work!

Email us at AntiFascistNews@gmail.com Submissions should be relevant to anti-fascism/anti-racism and deal with contemporary or "evergreen" issues. Put "article submission" in the subject title, and ideally you will include the submission as a Rich Text or Word document. We publish a range of article lengths, and are open to diverse styles, so send it in! We should be able to respond to every article submission. Also email in questions, comments, or if you want to volunteer to work on the website or other technical tasks.
Join 3,972 other subscribers
Loading Comments...