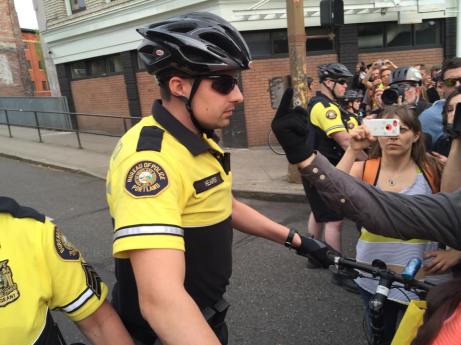 We come to mark it on our calendar every year. It comes as the annual chance to bring issues together, meet and greet and have an action that is often more about getting re-energized than about getting something done. This has gotten many May Day actions locally criticized for taking a huge amount of time, energy, and money, yet not resulting in movements that are any stronger. However, the last two years have really started to buck this trend, with last year really drawing issues of immigration together with the high profile fight between the ILWU and United Grain. This year Portland joined with cities around the country in identifying an overarching theme that effectively dominated the messaging: Black Lives Matter. 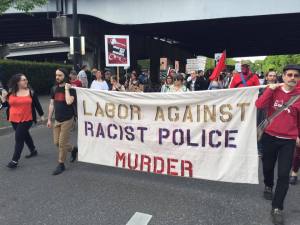 As groups gathered in the South Park Blocks there was a clear trend moving in that direction. $15Now had a large presence, which is drawing on the strength that they have had in the Northwest in recent months. The recent April 15th Fight for $15 action drew hundreds in Portland as $15Now, Jobs With Justice, SEIU and AAUP worked together to target the wage gap for workers in fast food, care working, and adjunct teaching. This messaging was continued, though Black Lives Matter was notably added to many signs and banners. They, along with Portland Jobs With Justice, made the largest labor showing, which is not unusual for a march that tends towards the more radical side of labor inclusion. Along the way there were many from Unite HERE Local 8, SEIU 49 and 503, AFSCME, Laborers’ and the Teamsters, though ILWU was notably absent. This is surprising after the announcement of ILWU’s May Day action in solidarity with Baltimore, as well as their huge contingent last year. The Carpenters and Painters unions, respectively, all brought notable contingents, as well as groups like the Portland Industrial Workers of the World, Portland Solidarity Network, and the VOZ Workers’ Rights Education Project. 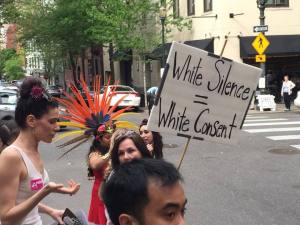 The day began with a pre-march starting at Portland State University called by groups like the Student Organizing Committee, made up of students from multiple Portland area colleges, and Don’t Shoot PDX, marching in solidarity with Baltimore. Several hundred challenged the campus and took the streets in a large un-permitted march, galvanizing energy that they led back down to the May Day central meeting space. From here on the messaging continued towards targeting racist police violence, and it integrated that message into areas that this type of analysis is often absent. A large banner read “Labor Against Racist Police Murder” drew a strong line about where many in the local labor community stand, where the police union often tries to draw divisions in the AFL-CIO over this issue. 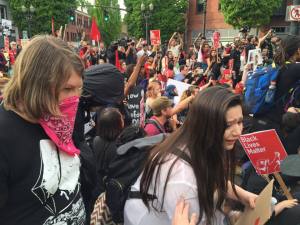 The participation demographics also shifted further away from the sea of homogenous white faces that have often colored other actions. Folks of color, as well as organizations like the All African Peoples Revolutionary Party, shifted the conversation in a way that really indicts the institutional racism that is getting highlighted in these high-profile police killings. Throughout the march, which made many stops, detours, and splits, folks of color took the lead in showing direction and targeting purveyors of institutional violence.

“How many people must die in this system before we realize it was not built for us?” said Adrienne Cabouet, challenging the liberal notion that the institution of policing simply needs to be reformed. 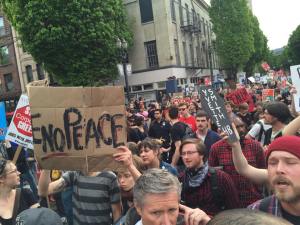 After the march took off, taking well over a thousand people to the streets, the first stop was to swarm the Justice Center, as speakers called out the trend, both nationally and regionally, to scapegoat communities of color and to act with violent fervor with complete impunity. The march then headed straight down to Burnside, the major road dividing Downtown Portland, and hit a right to take the bridge. This was when police made their first confrontation, lining up to block protesters. It was in moments like this that we have seen a clear change in the character of protests, where organizers and participants are much more willing to challenge the violence of the police. Instead of backing down, their voices were loud with chants and speak-outs that showed a real energy that stood against the officers. Quickly storm troopers in tactical gear showed up, and police began pepper spraying the crowd, clearly agitated that some people were peacefully using strong language. Instead of running, the crowd blocked the tear gas and sat down in defiance, proving that they controlled the situation and the streets. 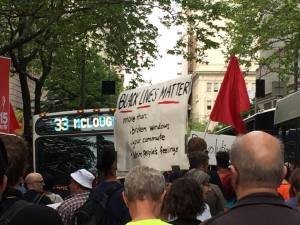 At this point the march split in two and one headed down the Naito Parkway, then up to Pioneer Courthouse Square. Here, street theater and chants targeted the racial aspects of Wells Fargo’s involvement in the private prison system. The downtown Wells Fargo branch shut down as protesters did a mock “slave auction,” and a banner was displayed reading “Felon is the New Name for N*****.” After a convergence in the square where speakers discussed the personal ways that police violence has brought fear into their families, the march re-engaged the streets in an unpermitted action. It was here the police openly used flash-grenades and pepper gas, hitting several protesters that had to be carried out. The police demanded the streets cleared, which had almost no response. Burnside Bridge remained a target, getting shut down as protesters continued to push. 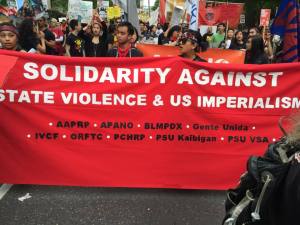 What we saw for the 2015 May Day is a notable shift towards militancy, really brought about by the escalations in state violence. While all of these issues are clearly related, as economic inequality and racism are scourges of social hierarchy, the blood that is soaking our streets brings us to a place of urgency. This was felt in spades around every movement represented there. Cultural and ethnic groups were standing alongside the various community organizations. Groups like the Asian Pacific American Network of Oregon, Movimiento Estudianti Chicano de Astlan, as well as a coalition project made up of groups like the AARP and BLMPDX declaring “Solidarity Against State Violence and U.S. Imperialism.” This is a strong turn where by the idea of organizing has pushed out of its usual circles and into those that have often stayed on the periphery. Now it is necessary.   Now it has to happen. 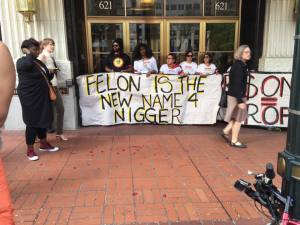 Another notable addition was the increase in the presence of housing groups. Beyond the Portland Solidarity Network discussing its tenant support campaigns, there were representative organizations from the Right to the City Coalition and the Western Regional Advocacy Project. Right to the City is looking towards focusing on progressive candidates for local office in 2016 and WRAP has been focused on the Homeless Bill of Rights, but both show a trend returning housing justice to the forefront of organizing circles. Much of this may be coming from the beginning Renter’s Assemblies, which have been having a huge recent success in Portland and around the country. It also is likely coming from Socialist Alternative’s push to follow $15Now with a focus on rent control, which is the pattern they showed in Seattle. Either way, this return to the targeting of housing issues is critically important as Portland’s livability rapidly declines with rising rents, and a new housing crisis could be close on the horizon. PDXSol was specifically discussing a project on the outer eastside of Portland, where they have been working with tenants who have been pushed out of the center of the city by rising rents and gentrification.

Black Lives Matter is a movement that is changing the shape of organizing. This kind of mobilization towards inclusivity and against the institutional racist violence that is ever present is an incredible development. As Freddie Gray’s killers have been indicted, let’s hope this only mobilizes folks to take on the police in further escalations. It is through the collective action of the people that we can transform systems, and create a community that can use systems of transformative justice rather than state violence to drive safety. What we are also seeing is that movements are again using annual mobilizations like May Day to push existing social movements, which is the perfect way to utilize a mass grouping that already exists. In 2014 ILWU drew a breakaway to confront United Grain, but this year it was more than a dozen groups who were all converging on a single theme: end racist violence. In this way it was several parallel and converging movements not just tapping into the existing thrust of May Day, but completely taking it over. And in this situation, that is the best thing that could have happened.