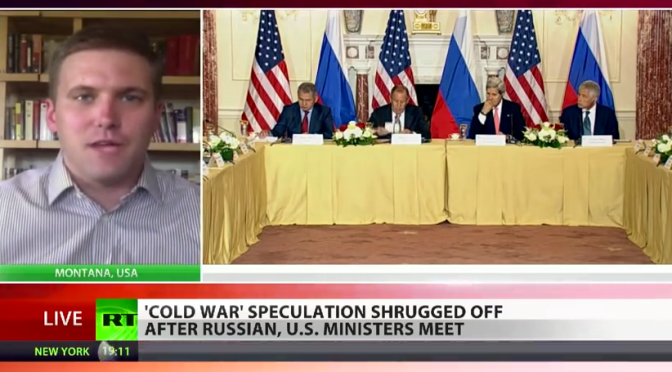 The news cycle has had another spike around the clickbaiting Trump campaign now that Vladamir Putin has thrown some tacit support around the racist billionaire.  This is not surprising given Russia’s use of racialist internal politics and support of nationalists in Eastern Europe, but this also stokes tensions between Trump and the GOP as the Republican perception of Russia tends to be as though it was still the Cold War.  This gave a lot of relevance to Russia Today, the essentially westernized cable news channel that is so popular in U.S. social media circles for its commentary, debates, and somewhat sensationalized news coverage.

As the Putin endorsement story coalesced, RT thought it would be a good idea to bring on Richard Spencer, the founder of Alternative Right and the Radix Journal.  Spencer has been on RT as a commentator, and not a subject, a large number of times, usually talking about U.S. foreign policy.  What they fail to mention is that Spencer is a leading white nationalist and has become the intellectual center of the “alt right” neo-fascist movement in America.

Speaking to RT, he joked about American audiences and their “shrill” ideological battles, but then “lays it down” for the RT audience.

This is another thing where the American media doesn’t really understand Putin. Because Putin is not a shrill ideologue like they are. Putin will speak diplomatically, will speak carefully and they just don’t get that. I think what Putin is saying when he says that Trump might deepen relations is that Trump is not going to treat Russia as an enemy. Remember, Mitt Romney who wasn’t even the craziest of the conservative bunch said that our number one geopolitical adversary is Russia. That is ridiculous. Anyone who would say that is not looking at the world as it is; they are looking at the world through some 1980’s Cold War rosy glasses. Trump, I think, would really deepen the relations in a sense he wouldn’t treat Russia as the Soviet Union or as Nazi Germany or some rogue state. He would treat Russia realistically as a state that has its interests, that has interests that might align with the US in certain situations and I think he would treat that where conflicts would be Trump would make a deal. He would deal with Russia as a real, legitimate actor of a legitimate state. So, in that sense, I truly do hope Trump gets elected. I think the world would be a more peaceful place with this bombastic man in power.

He has gone on RT and discussed the conflict in Ukraine, calling this a “new Cold war” in a battle between Moscow and Washington.  His idea that this is a “proxy war” is not an uncommon one, yet his interest in this comes from the nationalist militias that have formed in Ukraine over anti-EU tension.

Spencer, who leads the white nationalist “think tank,” The National Policy Institute, the “race realist” publishing house, Washington Summit Publishers, and the all-racist culture journal, Radix, is not someone who would normally be considered to be a commentator.  Generally, these are experts in a particular field, at least those with moderate views that are tainted by very extreme bigotries.  Spencer holds none of this expertship, and instead is someone that, in the U.S. has been the subject of “point and sputter” stories, to use Spencer’s own reference to coverage by Rachel Maddow.  Spencer is someone who believes in forming a white Ethnostate, that black and Latino people have innately lower IQs than whites, and that we need to restore a fascist empire with European “spiritual” qualities.  This is not the voice of a general policy commentator, so why is RT employing him as such?

This is certainly not the first time the RT has brought on co-hosts with this type of reputation.  In the past they have also hosted national anarchist Keith Preston, who joins Spencer on the “alt right” sharing his weird synthesis of anarchism with far-right libertarianism, nationalism, and bizarre ideas about tribal identity.  RT has hosted one of the leaders of the race realist and “human biodiversity” movement, which is primarily the idea that people of color in the global south are intellectually inferior and prone to criminal behavior.  Jared Taylor, the founder of the New Century Foundation and American Renaissance, has come on multiple times, often given complete platforms to debate his ideas about diversity and racial inequality.  Founder of the White Student Union and the Traditionalist Youth Network, Matthew Heimbach, has also gone on RT for a softball interview where he was able to prove he was just “not racist.”

When looking at RT broadly, they are not just leaning to the far right as they often have people like anti-racist commentator Tim Wise.  The real question here is why people so far outside of the mainstream and who’s ideas are not relevant to general commentary on news issues are allowed to present contemporary news stories.  One simple answer is that RT does not have the cache to actually attract name talent, which is likely a large part of it, as well as the fact that the primary RT audience is not going to know the difference between different unknown people.  The other side of this is that they are likely carving out a niche for themselves by providing fringe and sensationalistic commentary, which, though in different types of content, is commonly done at places like Fox News and Al Jazeera.

We stand with the Anti-Fascist Action principle of “no platform,” which means we do not debate with fascists and allow them a platform to share their ideas.  The easiest way to approach this issue with RT is to continue to make our voices heard that we will not tolerate these type of commentators to be allowed in as “just another voice on an issue.”