In continuing to bring you interesting news, documentaries, and reports from the front lines of anti-fascist struggle we have been sharing a series of short documentaries from Vice Magazine on the rise of the far-right internationally. Much of this has focused on European fascist movements like Pegida, UKIP, and Golden Dawn, but this is not just a Euro-centric problem. An imperial neo-fascism has been brewing in Japan for years based much on the legacy of their monarchial past, and from their current place in the Asian world. Today, many are noting that the nationalists in Japan have connections to traditional organized crime in the country, known as the Yakuza.

We are continuing to bring you Vice Magazine’s anti-fascist videos under the “Hate in Europe” series, which looks at the different fascist movements in Europe and their anti-fascist response.  A lot of neo-fascist parties and organizations throughout Europe are basing their growth on the targeting of Muslim immigration into generally “white” countries.

In Austria, the anti-Islamic group Pegida(Patriotic Europeans Against Islamization of the West) is going after Muslim neighborhoods, demanding that they leave “their” country.  Pegida began in Germany, but is now prevalent in Austria, Switzerland, Spain, Belgium, and other Western European countries.  This is part of a larger movement, which is taken up by the Austrian Freedom Party, UKIP, the National Democratic Party, the European Defense League, and a whole number of other above ground movements calling for a hault on Muslim immigration into Europe.  As is happening in a lot of places, such as with the Ultras in Rome, Pegida takes the form of soccer hooliganism, where the social bonds that keep it organized were developed in sports arenas.

The anti-fascist protesters that formed noted that Pegida began by protesting foreigners and refugees, and act that clearly undermines their claims that they are just against the conservative and anti-democratic strains of Islam.  They were using the Charlie Hebdo massacre in Paris in 2014 to whip up a racist and Islamophobic fervor. 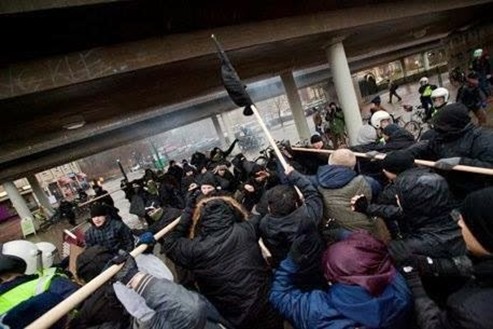 Continuing with our mission to collect and share incredible stories on the conflict between fascist and anti-fascist organizing world wide, we have been sharing the various short documentaries that Vice has been producing about the growth of the far-right around the world.  Here, they are looking at the rise of Swedish nationalism, and the incredibly militant anti-fascist groups that have formed to combat them.  The Revolutionary Front is using all means at their disposal to force racists out into the open, which has been important as immigrants and Muslims become the new main focus for organized reactionaries.

As a part of our commitment to finding and sharing great stories of anti-fascist resistance, we have turned to Vice magazines various new mini documentaries about fascist and anti-fascist conflict.  This is happening in places all over Europe where immigration and austerity are sources of conflict.  This clash is enough to feed the far right, especially in places of critical importance like Greece.  Golden Dawn’s rise as a real political force was matched with Anti-Fascist Action and anarchist organizations in terms of force, and there has been a guerilla war on the streets.