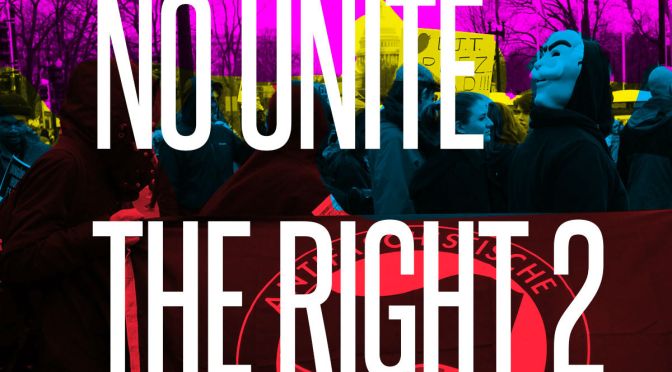 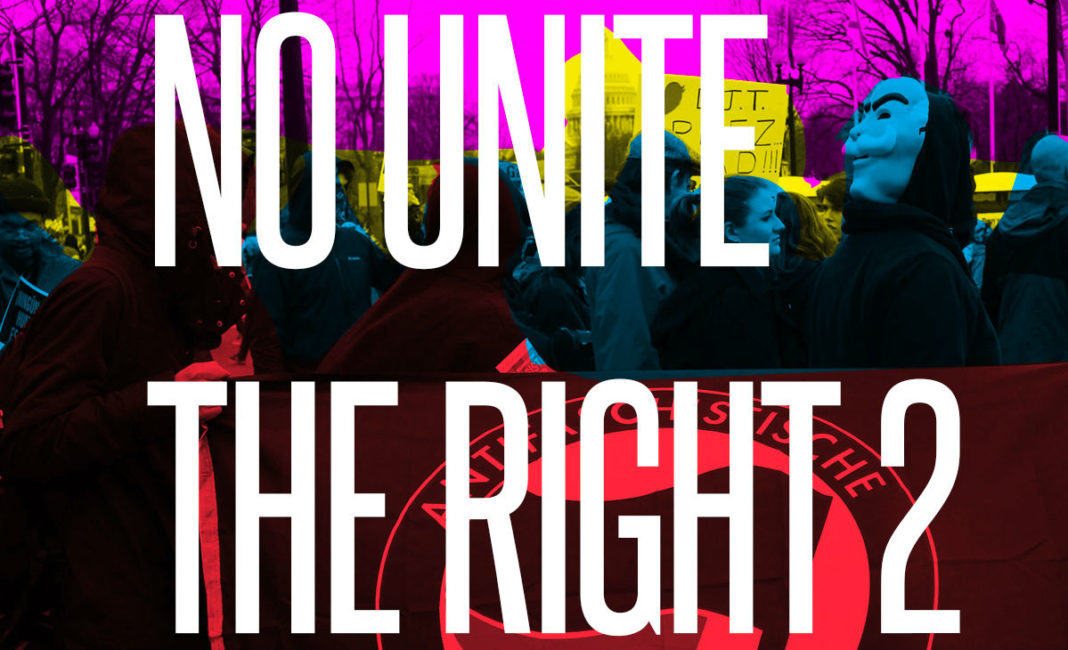 A call for an antifascist and abolitionist bloc on August 12th to show that the Alt-Right is not welcome in DC.

On Sunday, August 12th 2018, Nazis, white nationalists, and others fascist groups comprising the so-called ‘alt-right’ will descend on Washington, DC to hold “Unite the Right 2” in front of the White House at Lafayette Square. The rally will coincide with the 1-year anniversary of the cowardly attack against anti-racist demonstrators in Charlottesville that took the life of Heather Heyer and brutalized members of Charlottesville’s Black community, including residents Corey Long and Deandre Harris.

Here at the heart of the white settler-colonial state in America, communities of the DMV have learned well how to defend themselves against oppression. On a daily basis, in Black and Brown neighborhoods between DC and Baltimore, police act as an occupying army—a criminal gang in blue leaving a trail of broken lives in their wake. Days before Unite The Right in Charlottesville last year, Nazis rode through Southeast DC—a historically black neighborhood—openly brandishing guns and confederate flags. In the suburban communities around DC, sheriffs openly cooperate with ICE through 287g kidnapping our neighbors and tearing apart our families.

Make no mistake, the violence of the US police and prison systems and the genocidal agenda of these fascist groups are two sides of the same white supremacist coin: systems of racial domination predicated on state-sanctioned violence, murder and terror with impunity. The United States was and continues to be built on oppression, enslavement and mass extermination, today manifested in the form of police terror, mass incarceration, and imperialist war-making against racialized ‘others’ abroad. 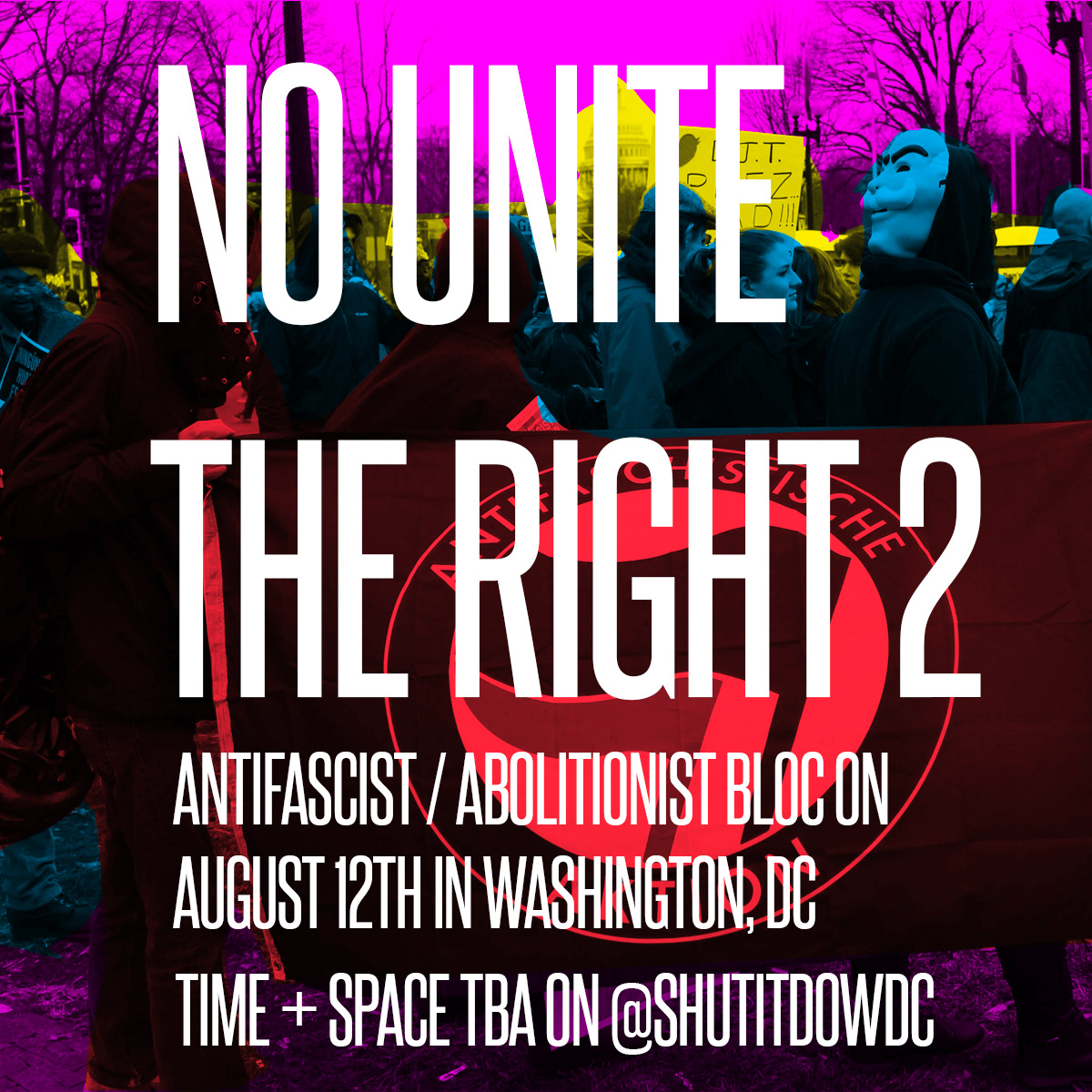 The regime relies on and is sustained by the imposition of coercion and terror aided and abetted by its non-state allies and auxiliaries drawn from the far-Right like the KKK and neo-Nazi groups. As we have seen time and again, the fascist formations marching on Washington, DC on August 12th are working in close collaboration with law enforcement, including in Virginia State Police and the Metropolitan Police Department.

In the US and around the world, the rising tide of authoritarianism and fascism is fueled by the fomentation of violence against our communities: the retrenchment of long pervasive patriarchy and misogyny; the murder and degradation of Black and Brown lives; the criminalization of immigrants; the oppression and dehumanization of the LGBTQAI+ and two spirited communities; the normalization of Islamophobia and the expansion of the national security state; the intensification of anti-Semitism; and the ongoing war against working people waged by the corporate elite and their political cronies.

In solidarity with the Black Lives Matter Contingent, the Queer Bike Bloc, aligned community groups, congregations, and individuals planning direct action, rallies, and occupations against fascism in the DC-Maryland-Virginia area, we are calling for an explicitly Anti-fascist / Abolitionist Bloc on August 12th. We call on all people of good conscience to support our community’s self-defense, confront the fascist filth, and shut them down.

Anarchists, anti-authoritarians, abolitionists, and all anti-fascists: let this be a call for unity with all oppressed peoples in a sustained struggle for our collective defense and liberation.

Look and listen for the black flags and sound system on August 12th in Washington, DC. Watch for time and place on August 11th on @ShutItDownDC

Mask up, dress up in black, no phones, no live streams, solidarity and love one another. We’re not going it alone.

To see organizing updates, and who is involved please go to www.shutitdowndc.org

After the deadly Unite the Right rally in Charlottesville on August 12th, 2017, the Alt Right has been hit hard by organizers, community members, and, now, lawyers.  There have been lawsuits filed against high profile members of the Alt Right who were connected to the rally, such as Mike Enoch (Peinovich) of the Daily Shoah, Richard Spencer of the National Policy Institute, David Duke, and others.

Well known corporate attorney Roberta Kaplan took up the case against the Alt Right and filed the lawsuit in November of last year.  The twenty-five defendants range from individuals like Richard Spencer and Jason Kessler to organizations like the Loyal White Knights of the Ku Klux Klan, all of which were active in the rally and its violence.  On May 24th a hearing was held on motions filed by some of the defendants, including Richard Spencer and Mike Enoch, to have the lawsuit dismissed saying that none of the violence on August 11-12th was pre-planned.  This runs against evidence from places like leaked Discord servers that appeared to have discussions of violence, or the general communication from the white nationalists involved.  These lawsuits are additional to the criminal charges against people like Christopher Cantwell (who is also being named in the lawsuit) and KKK member Richard Wilson Preston, who allegedly discharged a firearm into a crowd of protesters.

Richard Spencer has been trying to find appropriate legal council, especially after his former attorney, Kyle Bristow, decided to leave the white nationalist movement after pressure from activists.  Spencer did a public plea asking for $25,000 in donations, the base fee his new attorney requires to defend him, but only has successfully brought in just over $20,000 by the morning of May 24th, though Spencer alleges he met his goal when crytpocurreny was included.  On May 23rd, Charlottesville-based attorney John DiNucci filed court documents for Spencer, answering the question about whether or not Spencer would have to defend himself in court.

U.S. District Judge Norman K. Moon started hearing arguments at 10:30am on Thursday.  Ohio-based attorney Jim Kolenich presented the arguments representing the majority of defendants, arguing that there is no real evidence linking the defendants and the violence of the rally.

These types of lawsuits have been successful in the past.  The SPLC has taken down organizations like the United Klans of America, White Aryan Resistance, and the Aryan Nations by holding those organizations financially accountable for the violence their members carry out, noting that they have stoked that violent behavior.  It is important to note, however, that lawsuits are not a sufficient response, and instead organizing is critical if the Alt Right is to ever really be shut down.

The final decision by the federal judge about whether or not the lawsuit will go forward will be made within the next month.

Email us at AntiFascistNews@gmail.com Submissions should be relevant to anti-fascism/anti-racism and deal with contemporary or "evergreen" issues. Put "article submission" in the subject title, and ideally you will include the submission as a Rich Text or Word document. We publish a range of article lengths, and are open to diverse styles, so send it in! We should be able to respond to every article submission. Also email in questions, comments, or if you want to volunteer to work on the website or other technical tasks.
Join 3,972 other subscribers
Loading Comments...