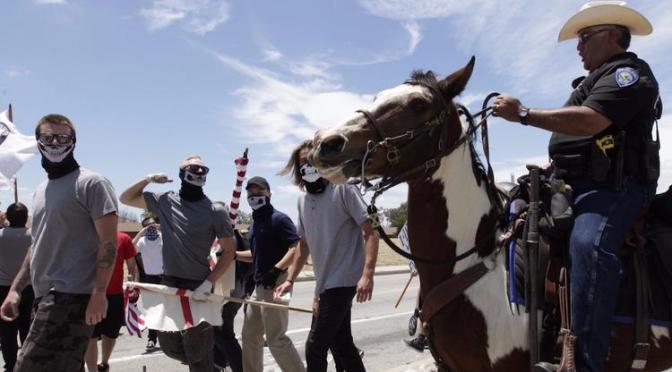 Dealing With the Liberals

During our anti-fascist organizing meetings, people from the liberal group rise up tried to derail us. They disrupted our meetings and tried to get us to stay home saying that they thought we weren’t going to be effective and that we would just play right into the fascists hands. We made it clear that they were not welcome back, but they still tried to sabotage us in other ways.  One of our organizers was the target of a harassment campaign set up by a member of Rise Up. He received dozens of phone calls from members of Rise Up harassing him.

Despite the needless roadblocks presented by liberals, we were still able to organize a force of about 100 people to take the northwest street corner of Waterman and Orange. In Southern California, especially San Bernardino, it is almost impossible to organize any kind of demonstration without the sponsorship of liberals and Democrats. We threw them overboard and actually organized more people than they did at their “counter demo,” which they organized more than a mile away. Given the unfavorable organizing conditions here, triple-digit attendance is a huge win for us.

We instantly recognized at least 50 of the people in attendance at the “anti-Sharia” rally as Orange County residents. The group that calls themselves the Proud Boys showed up in droves, and are from Orange County (one of our chants was “Proud Boys, Shameful Men!”). We also recognized some Oath Keepers and 3%ers, local violent patriot militia members, although they were not carrying firearms. According to our intelligence gathering, the Oath Keepers and 3%ers were actually driven in from out of state.

This tells us the fash can’t effectively organize without importing other non-local groups, something they have done around the country at these “free speech” rallies. This just goes to show that they have no ties to the community whatsoever.

We organized a coalition comprised of a dozen socialist, communist and anarchist groups all local to the Inland Empire. We were supposed to have the support of a lot of Los Angeles based groups, but the majority of them bailed on us at the last minute. Despite the non-locals who did not turn out for us, we still had a big enough crowd to hold that street corner. The fash attacked us on four separate occasions. We were a quarter of their size, so we recognized that any action on our part that could be seen as “violent” would result in us losing the street corner. The reality was, the fash charged us and if we had responded, it would have been self defense.

Our tactic instead was to pack together as densely as possible and lock arms so that we couldn’t be split by the incoming fascists. When the cops saw that we were literally going to turn ourselves into punching bags, they decided to get involved. Every time the fash tried to charge us, we locked arms and the cops blocked their path. We were all expecting the opposite. We thought the cops were going to watch us take a beating. Even though they did the right thing at those moments, the cops still surrounded us with their batons out, acting like they were going to attack us. The cops were a lot rougher on our guys than they were on the fash. If we set one foot on the street the cops were all over us screaming to get back on the sidewalk.

Meanwhile, the fash was doing the exact same thing with very little interference from the cops. At the end of the day, despite being a fraction of the size we were louder, more disciplined and more militant. We weren’t able to shut their rally down, but we held our ground successfully. We frustrated the fash so much that they turned to vandalism to get their anger out.

1 injury on our side

3 arrests on the fash side

1. Don’t consider liberal feelings, you don’t need their sponsorship to do anything.

3. Be aware of the reality of your situation. Poor choices will result in self-destruction and a clear victory for fash.