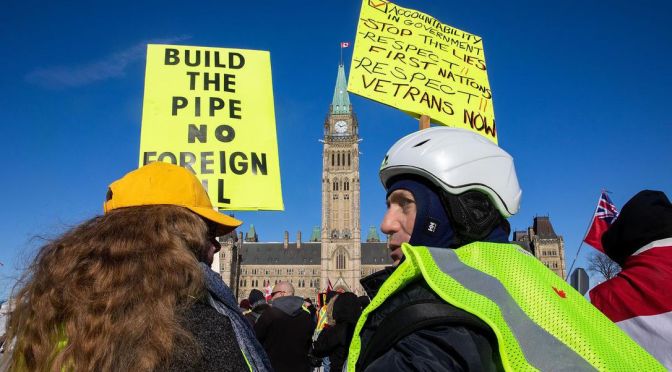 On Tuesday, February 19, 2019, a convoy made up of hundreds of semi-trucks, pickups, cars, and buses rolled into Ottawa for a protest against the Liberal federal government. Dubbed the United We Roll Convoy, the protest originated in Alberta ostensibly to protest the federal government’s policies on the oil industry and to call for new oil pipelines and extractives industry developments. However, the convoy and protest were made up largely of people associated with the far Right “Yellow Vests” movement in Canada (the original name of the convoy was the “Yellow Vest Convoy”—changed to cover up that connection). The Yellow Vests movement in Canada have nothing in common with the French Gilets Jaunes and are really an effort by far Right and white supremacist groups to give a populist dressing to their hate.

Despite spokespeople’s efforts to emphasize the fossil fuel industries, and to deny far Right and racist motivations, participants have openly stated their displeasure with the government recently signing a non-binding United Nations compact on global migration. Even lead convoy organizer, Glen Carlitt, has insisted that “Canada’s borders need to be controlled by Canada and its citizens.”

While the convoy of vehicles took up a large space, almost a kilometre of Wellington Street, in front of Parliament, the numbers of actual individuals protesting was relatively small. Notably they included far Right speakers, in fact known fascists, such as open white supremacist, self-proclaimed propagandist for the “alt-Right” Faith Goldy. Fascist supporters of the convoy included: David Selvers and Millennium Crane in Sault Ste Marie; Christopher Hayes of Soldiers of Odin and Worldwide Coalition Against Islam (WCAI). Dan Dubois, leader of the Canadian Combat Coalition, led the convoy at points along the route. The Yellow Vests movement has issued death threats against Muslims in Canada.

What is perhaps more telling is the open public support, and active participation, of several high-profile mainstream conservative politicians in Canada. This includes federal Opposition Leader and Conservative Party head Andrew Scheer, and leader of the new alt-Right Peoples Party of Canada (and former Conservative Party member and leadership hopeful) Maxime Bernier, high ranking Conservative Member of parliament, Pierre Poilievre and Conservative Senator David Tkachuk. Scheer went a step further and got into one of the trucks with a slogan on the side. Ontario Premier Doug Ford gave supportive public messages to the Yellow Vest convoy along the way, as did United Conservative Party of Alberta leader Jason Kenney.

The convoy was confronted, and indeed outnumbered, by a counter rally organized by Indigenous Solidarity Ottawa and Ottawa Against Fascism. Under the banner Stand Up for Land Defenders, the counter rally shouted down and drowned out Yellow Vests speakers with chants of “Nazi Scum off Our Streets!” About two dozen people held a round dance in front of Parliament and the Yellow Vests. Predictably police organized to protect the fascists. They stood facing the Indigenous and antifa rally who they clearly view as the threat here.

Indigenous counter-protesters, like Wolf Tabobondung of Wasauksing First Nation, point out that the extractives projects and pipeline developments that the Yellow Vests are promoting are being carried out on Indigenous lands and imposed on Indigenous communities. Often these are unceded lands, that the state and corporations have no standing over, and in other cases are happening in violation of treaties. These are significant matters that connect issues of resource extraction, industrial development, statist “nation building,” and fascist mobilization (including against Indigenous communities).

A point that can be raised in this regard is the composition of the Yellow Vests convoy. The trucking industry in Canada is made up of large numbers of workers of color, including many recent migrants. Yet, for a rally of supposed truckers, the Yellow Vests convoy was exclusively or nearly exclusively made up of white drivers. In no way a representative expression of concerns and interests of drivers in the industry.

Email us at AntiFascistNews@gmail.com Submissions should be relevant to anti-fascism/anti-racism and deal with contemporary or "evergreen" issues. Put "article submission" in the subject title, and ideally you will include the submission as a Rich Text or Word document. We publish a range of article lengths, and are open to diverse styles, so send it in! We should be able to respond to every article submission. Also email in questions, comments, or if you want to volunteer to work on the website or other technical tasks.
Join 3,973 other subscribers