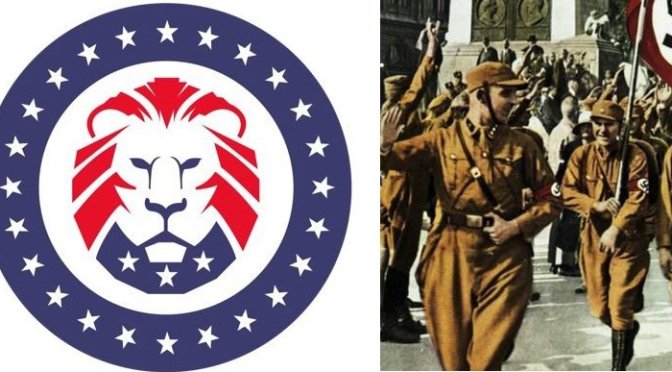 The debate as to whether or not the Donald Trump campaign is fascist has tossed between scholars and activists for months, with more and more people allying with the idea that Trumpism is a unique, 21st century American fascism.  Some established scholars in Comparative Fascist Studies have refused to go beyond lines like “fascist-like,” “proto-fascist,” or “right populist” to describe the phenomenon.  Robert O. Paxon, often called the establishment voice of Comparative Fascist Studies with his book The Anatomy of Fascism, recently went on Democracy Now to discuss the Trump phenomenon.  Here he correctly said it was inappropriate to call Republicans or authoritarianism at-large fascism, and then went on to say that if a paramilitary violent force was institutionalized in support of Trump then he would truly be a fascist.

One of the qualities of fascism was that they admired violence. They thought that violence had an esthetic quality, provided it was violence directed toward the revival of a damaged country or damaged state. And a little of that redemptive violence is showing up in Trump’s rhetoric, because he’s suggesting to the crowd and encouraging them to think that it’s good to rough up people they disagree with. And this is an ominous development.

It looks like, only a couple of days later, this has crystalized.

Donald Trump rallies have seen increasing violence against protesters, from videos of angry white men yelling “go back to Africa” or “send them to Auschwitz” to demonstrators to the aging racist who sucker punched a black protester as he was being led out.  Protests have only increased, culminating in the Chicago action that completely shut down the Trump rally before it began.

Now, a group of militant Donald Trump protesters have formed a militia paramilitary wing to attack leftist opposition at Trump events.  Named after a quote from Benito Mussolini, “It is better to live one day as a lion than one-hundred years as a sheep!”, a quote which was already passed around by Trump on Twitter, the Lion Guard is exploding onto the right-wing political scene and adding locals in different states.  In their announcement letter, they say that the leftist opposition comes from an unchallenged “cult,” of which they see the need to create a counter-cult of violence to shut them down.

On March 11, 2016, five decades of radical left coddling reached its newest and most disgusting low as members of the free stuff cult, by deception and violence, attacked the Trump 2016 rally in Chicago, Illinois. In his magnanimity and concern for public safety, Donald Trump responded by canceling the rally. The Spartacists posers crowed they had canceled the rally, chanting they “Stumped Trump.” As a single event, it was minor and unsurprising, Chicago was the scene of the 1968 Democrat Convention Riot and, in the current year, the city is teeming with anti-American agitators and a skyrocketing murder rate. But this was not an isolated incident, this was part of a long train of abuses imposed upon the American public by treasonous horde.

The wicked deeds of this horde are not merely historical events; as many witnessed this weekend, an American hating brigand attempted to take the life of Donald Trump. He did not get there as part of some grand conspiracy, no one dare implies the Secret Service or Trump’s own security knowingly allowed this marauder into the rally. How did this son of a Democrat establishment cog get so close to Donald Trump? The same way as the scores of hooligans infiltrated the Trump rally in Chicago: lies.

Numerous tweets discovered after the leftist hate-nanny in Chicago revealed, these agents of chaos posed as Trump supporters to get tickets and to get access to the event. Amazingly, these people were gloating before the event started. Posting to social media their plans and appearances in a desperate attempt for social approval of their Maoist tactics. When seeing these egotistical tweets, there were two choices: endure the outrage of this conceit or stand up to it. To “Make America Great Again” there could only be one choice: stand up to it.

The foes arrayed against the movement to Make America Great Again are not invincible. If there is one word to describe them, they are vain. They act not out of a sense of patriotism but a compulsive need for affirmation that they are morally superior. With the advent of social media, this quest for recognition has taken new directions. In the past, these rabble would find much needed approval at their turncoat gatherings, seeing fellow cultists recite the same slogans and pantomime the same charades. Today, these malcontents can get their approval before they even engage in their pretentious farces by merely broadcasting their plans. They are not hesitant to announce their depravity because they think there are no consequences for their conduct. They gloat while under the hallucination they are above the law.

In the current year, it is very difficult to disabuse them of such a fantasy. Within 24 hours, the man who attempted to assassinate Mr. Trump in Dayton, Ohio, was released from jail and being interviewed on CNN. Within 24 hours an avowed anti-American bigot that tried to kill a presidential candidate was being interviewed by a major US news network like a national hero. Today in the United States, hating America and attacking American patriots is celebrated, while loving the USA and defending patriots is ridiculed as “extremism” or other sophistries. With the establishment, both left and right, against any effort to Make America Great Again, we cannot expect traditional channels of influence to stem this perfidious tide. Make America Great Again cannot be a mere slogan, it has to become a life choice in the face of force that wants to make America cinders forever.

At his Kansas City rally Sunday night, Donald Trump correctly identified the cultists attacking his rallies as the same forces trying to destroy America. As patriotic Americans, we must stand up to them. How to stand up to them is the issue. One suggestion is creating a paramilitary organization to patrol future Trump rallies and stop any violence by the America-hating fiends. While not a bad idea, it calls on fellow Trump supporters to engage in the sort of brawling the mainstream media wants to use against the Trump campaign. It also seems redundant, Mr. Trump already had secret service protecting his life and well paid security protecting his events from gate crashers. Mr. Trump’s problem is not the barbarians at the gate, it’s the sappers within them!

Another suggestion is to scour social media for all threats against Mr. Trump and his rallies and to report them to the secret service. While this can be useful with blatant threats against the life of Mr. Trump and his supporters, it is unreasonable to expect the Secret Service to use its limited resources to screen out reprobates trying to cause another Chicago. Trump’s security may have more resources for screening, but it is doubtful they have the necessary resources to gather intelligence and identify infiltrators before they can act. This creates a gap in Mr. Trump’s security, where those who wish to intimidate Trump’s supporters can sow discord at Trump rallies. While reporting would-be assassins to the Secret Service and Trump’s security helps, it is not enough to stop another Chicago or Dayton.

The Lion Guard is a call to put the words “Make America Great Again” into action and aid Trump’s security and show our adversaries we are disciplined, perceptive, and watching. Everyone who identifies with the idea of Lion Guard is called to search out for any Anti-M.A.G.A. social media account that is planning to infiltrate, disrupt, attack, or otherwise do harm to Mr. Trump, any Trump rally, or any Trump supporter. Archive any post or other broadcast plotting these assaults and the identity of the plotter(s) and share it on your own social media account, with the Trump Campaign, with the Secret Service and/or with Lion Guard. Fellow Trump supporters at the rally, will see these exposed plots find the plotters in the rally crowd and report them to Trump’s security for prompt expulsion because they breached the terms of their ticket. If you want to make sure there are Trump supporters on watch at every rally, start a Lion Guard chapter in your town TODAY. But remember, Lion Guard is principally to observe and report these vandals to the proper authorities, not confront them with force; we will not give the media more fodder against Mr. Trump and his plans to Make America Great Again.

This force is the modern version of the Brownshirts, a paramilitary force that is meant to attack political opponents and leftist voices and to institute a social force of violent coercion.  For Paxon’s view of the Five Stage of Fascism, this paramilitary wing is a crucial part of the development of a fascist movement that leads into the seizure of state power.  For those that have decried analogies comparing Donald Trump to the European fascism of the interwar period, it seems like the parallels are becoming hardened as we increasingly fit the model that almost all scholars have been warning us about.

This presents a unique challenge for anti-fascist as the numbers of those willing to rise up against this fascist political movement are increasing, and they are seeing violence as almost assured.  As Trump heads towards the general election, hopefully anti-racist and anti-fascist organizing will only continue, link arms with the larger immigrant rights and Black Lives Matter movement, and be able to confront the Lions Guard directly.

Email us at AntiFascistNews@gmail.com Submissions should be relevant to anti-fascism/anti-racism and deal with contemporary or "evergreen" issues. Put "article submission" in the subject title, and ideally you will include the submission as a Rich Text or Word document. We publish a range of article lengths, and are open to diverse styles, so send it in! We should be able to respond to every article submission. Also email in questions, comments, or if you want to volunteer to work on the website or other technical tasks.
Loading Comments...