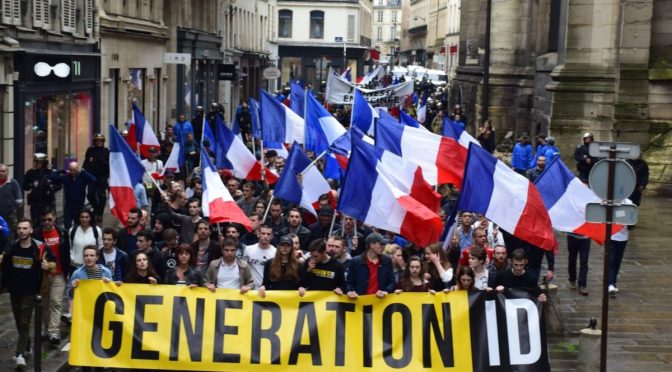 The Alt Right’s growth took a lot of people by surprise.  It was not just because of its explosion of popularity and public interest, but by the way that its ideas were coded and often phrased in leftist rhetoric.  This was not a product of their own invention, but a trend called “Third Positionsim” that has dominated since the early 1970s.  This trend takes elements of the left, such as anti-capitalism, anti-imperialism, or environmentalism, and plugs it into open fascism, trying to create a synthesis that can attract more recruits.

The most adept of this methodology was a French academic and fascist named Alain de Benoist and the European New Right movement he started.  Here they used a complex left-sounding language to rebrand fascism, calling it a “nationalism for all peoples” and trying to ally themselves with post-colonial and anti-capitalist movements for white nationalist reasons.  The European New Right slowly came stateside, influencing people like the National Policy Institute’s Richard Spencer.  While the work of the ENR is densely academic and rarely translated, we have compiled a list of resources so you can quickly learn about this fascist current that has helped to launch the Alt Right in the U.S. and the violent “identitarian” movement that is blocking refugee boats in Europe.  This will help us to understand their arguments, how their propaganda has worked, and how to stem off fascist entryism into left movements.

The Long Game of the European New Right (The Conversation)

Some Notes on the European New Right (Chip Berlet)

The French Ideologues Who Inspired the Alt Right (The Daily Beast)

Confronting the New Right (Gods & Radicals, a look at the ENR’s influence on paganism)

Academic Papers (Some of these are tough, but they give really deep background for those trying to get inside the fascist mind.  These also generally require some type of academic log in or subscription, but since they are all valued we decided to include them anyway.)

Myth and Violence: The Fascism of Julius Evola and Alain de Benoist

Between Metapolitics and Apoliteia: the Nouvelle Droite’s Strategy for Conserving the Fascist Vision in the ‘Interregnum (Great academic paper on ENR by Roger Griffin)

ENR and the Identitarian Movement and the Front National

The Ruthlessly Effective Rebranding of Europe’s Far Right (The Guardian)

European Politics Are Swinging to the Right (Time)

Nothing New Under the Fascist Sun: Le Pen, Trump, and the Alt Right (Jacobin)

3 thoughts on “Understanding the European New Right and Why It Matters to Antifascists: A Reading List”