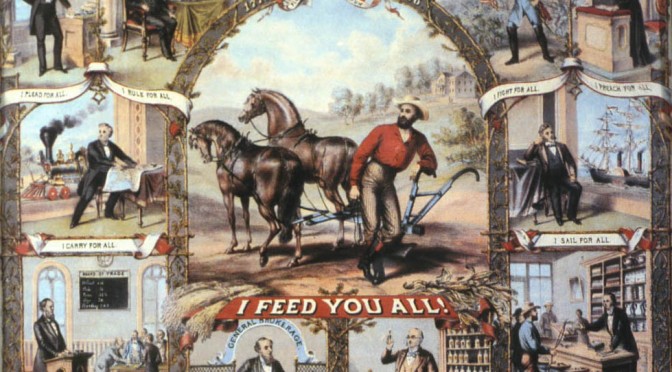 The disturbing rise of Donald Trump to the presidency and the growing  mobilization of rightwing forces in the United States has driven attempts to understand and situate trumpism and the particular brand of politics his rise signals. Most commentators have been tempted to look at rightist traditions outside of the US, whether right populism in Europe or Latin America or historic fascist movements as in Italy, Germany, or Spain. Yet I would suggest we can better understand trumpism and its place in rightist developments in the US by looking at a forgotten homegrown American lineage—producerism.

Producerism refers to a political-economic perspective of right wing populism. At the center of producerist ideas and movements is the notion that so-called productive members of society, typically industrial or more skilled workers, small business people, and individual entrepreneurs are threatened by dual pressures coming from so-called parasitical strata both above and below them in the social hierarchy. From above are the economic and political elites who live parasitically by usurping the value produced by their workers in the form of surplus value or profit. From below the middle class workers are threatened by the poor, unemployed, and those who receive social welfare. Both the elite and the non-elite strata live off of the value produced by the middle classes. Producerists present a picture of an imperiled middle class that is responsible for social wealth, growth, and development but is constantly squeezed by non-productive forces from above and below. The dual squeezing of middle class labor is said to drain society of its productive faculties and resources, leading to stagnation and eventual decline. The end result is a society that is lazy and unproductive due to pressures toward idleness, parasitism, and freeloading. For producerists, the middle class are the real engines of social growth and development are should fully enjoy the fruits of their labor, free of undue control from capital or taxation by government.

Producerism is an undertheorized, often overlooked perspective, yet one that has influenced a range of historical and contemporary right wing movements. Producerism was developed by organizations such as the Ku Klux Klan to mobilize working class whites against former slaves, union organizers, and Jewish workers in the aftermath of the American Civil War. Producerism found some expression in William Jennings Bryan’s populist opposition to the rail and mining monopolies in the late 19th and early 20th centuries. In the 1960s producerist rhetoric was used by George Wallace in his anti-federal, campaigns for states’ rights. It also found expression in Richard Nixon’s appeals to the “silent majority” and his so-called “Southern Strategy” to become president. Contemporary expressions of producerism are found in the Reform Party of America and figures like Pat Buchanan and Glenn Beck. The more recent Tea Party movement in the US, and its rhetoric of middle class decline, tax-cutting, cuts to social spending, anti-immigration policies, etc. is perhaps the most dramatic recent expression of producerism as a political movement. The images of the “Momma Grizzly” or “Hockey Mom,” popularized by Sarah Palin, are expressions of the tenacity or resilience of the middle class and entrepreneurialism.

Producerism represents a critique of capitalism and free market ideologies, but does so from a conservative or reactionary rather than a radical or progressive perspective. For producerists, the primary class within social change is the middle class rather than the proletariat or working class more broadly, as in anarchism and communism. In producerist perspectives, it is the so-called productive middle class, particularly better paid industrial or skilled workers rather than service sector workers or the poor, that produces value in society.

The value produced by middle class workers suffers a dual expropriation by economic and politics elites. On one hand the value they produce at work is expropriated by executives and owners who retain that value as profit. On the other hand the portion of value retained by middle-class workers as their wages is expropriated by government elites in the form of taxation. For producerists, middle class workers always bear a disproportionate and unfair burden in national taxation schemes.  On the one end, corporations enjoy a variety of tax breaks, rebates, and loopholes.  On the other end, producerists claim that the poor and lower wage workers are not taxed as heavily. This latter claim, of course, overlooks the heavier burden placed on lower paid and poor workers by regressive taxes such as consumption or sales taxes. The earnings expropriated through taxes are redistributed both upwards (as corporate grants and tax relief) and downwards (in social welfare spending for the poor and unemployed).

The usurpation of middle class value by large corporations and international finance capital siphons wealth out of the country, limits free enterprise and entrepreneurship, and destroys small business through monopolization. At the same time, the underclasses and migrant labor drain productive wealth away from entrepreneurs and industrial production giving it instead to supposedly wasteful government programs that benefit the least, rather than the most productive, strata in society.

Producerists, unlike anarchists, anarcho-syndicalists, and communists, are typically not anti-capitalists. Producerists differ from anarchists or anarcho-syndicalists even in the way that they view capital. Some producerists draw a distinction between what they view as productive industrial capital (which is usually portrayed as domestic) and so-called idle or unproductive financial or speculative capital (which is often constructed as international). While industrial capital is involved in the production of real material goods that address specific needs, such as automobiles or refrigerators, financial capital is viewed as purely symbolic or frivolous, undermining productive capital by wasting resources on speculative schemes aimed only at profiting the financiers. Speculative capital is connected with the rootless interests of cosmopolitan or multinational investors. This distinction between national capital and international capital or investors can give rise to racist formulations as in anti-Semitic constructions of finance capital as part of a Jewish world conspiracy. Such were the infamous formulations at the center of Nazi ideology, in which ill-defined notions of Jewish, cosmopolitan, and communist were equated in a paradoxical framework that also included global capital (also ill-defined).

In the period of capitalist globalization companies engaged in outsourcing, global movement, or investment, rather than domestic production, are viewed as a threat. Some producerists advocate protectionist policies and high tariffs to safeguard the domestic economy and workers. Foreign transnational companies are viewed as a threat, yet domestic transnationals, such as Wal-mart and Ford are viewed more favorably. The internationalist threat is, once again, posed from above (bankers, financiers, Trilateralists, the United Nations) as well as from below (socialists, communists, migrants, labor solidarity).

While primarily economic in orientation producerism often takes on cultural critiques.  Middle class values, associated for producerists with a sturdy work ethic, patriarchal and heteronormative family structure, and values of thrift and conservatism, are counterpoised against the so-called “decadence” of supposedly unproductive classes such as artists and writers.  These cultural workers, who are believed to live from government subsidies, grants, or welfare, are viewed as dangerous bohemians who threaten economic prosperity as well as cultural values.  Their “lifestyles” are again viewed as being subsidized or underwritten by the productive work and surplus value produced through the labors of the hard working middle class.

Often the terms are racialized as the middle class is presented as white and African-Americans and Hispanics are presented as lazy or bound by “cultures of poverty.” Producerists often take on nativist, even explicitly racist, positions toward immigrants.  Immigrants are viewed as a threat to the middle classes as they can be used to drive down labor values by expanding the labor market and, thus, depressing wages. Producerists accuse migrants of representing a drain on social services, particularly welfare, education, and health care.

Producerist narratives are often also gendered, presenting middle class workers as male and proper families as male-headed.  The narratives are also often heteronormative, presenting homosexuality as a form of unproductive decadence that threatens cultural values of restraint and discipline.

Producerism bears some relation to notions of social Darwinism in which poverty is viewed as the lack of “fitness” of the poor who should be left to survive by their own labors. Where the poor fail to succeed or survive the outcome is viewed as a reflection of natural selection at work.

The political ideology with which producerism bears the greatest similarities is indeed fascism. Indeed fascism is often viewed as a form of producerist ideology. Fascism, like producerism, also presents a view of society in which the middle class suffers a dual threat coming from above (financial capital) and below (the poor, unionized workers, the left). Hitler expressed the view that the state should respond only to the claims of the productive classes which excluded migrants and the poor.

Some producerists support skilled craft associations, even craft unions, as free associations of individuals. Yet they oppose industrial unions, particularly radical or syndicalist unions, as threats to production or advocates for the less productive. It bears watching to see what types of union formations might emerge as part of contemporary trumpist initiatives and to oppose them.

Originally Published in the Anarcho-Syndicalist Review #70

6 thoughts on “Producerism: The Homegrown Roots of Trumpism”