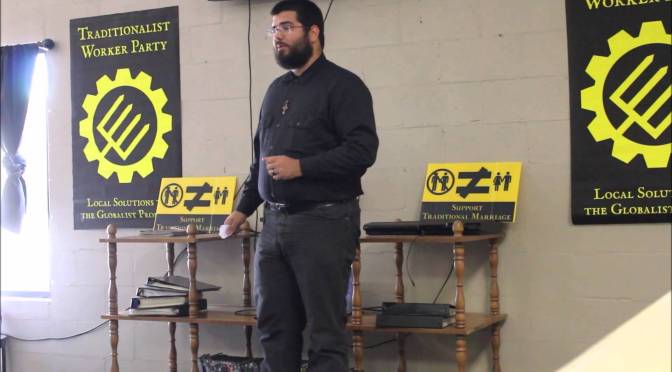 The Traditionalist Youth Network and Traditionalist Workers Party are starting to see just how much of a loss their failed event was in Sacramento. Trad Worker, and their leader Matthew Heimbach, had hoped that the publicity of the event would put them in a sympathetic light after having been so roundly shut down by Antifa.

During Trad Youth’s organizational conference in Tennessee, the hotel that was hosting them eventually asked them to leave after realizing who was hosting the meeting. They were told that it was for fear of disruption, either from the Nazi participants or from the wave of anti-fascists that might shut it down.

They cemented their neo-Nazi reputation by having Jeff Schoep, the leader of the National Socialist Movement, as well as Rick Tyler, a white nationalist running on a racist platform for the third congressional district of Tennessee. They also invited William Flowers from the League of the South, an organization that often tries to present itself as just a moderate Southern heritage group. Matthew Johnson of the Barnes Review was also in attendance, known for his Holocaust Denial and virulent anti-Semitism.

Trad Youth’s own Paddy Tarleton, who recently humiliated himself when he was tricked into given inside information about Trad Youth events to Antifa organizers, did one of his racist parody songs entitled “Joining BLM.”

After their main event they headed to the Confederate memorial in Cleveland, Tennessee. They are doing their best to unite their own fascism with reactionary Southern feelings about the Confederacy, and they have had success from drawing from Southern racialist organizations.

Trad Youth, and their political wing the Traditionalist Workers Party, is doing its best to maintain connections to the more suit-and-tie Alt Right crowd while also appealing to the gutter violence of the KKK and Nazi skinhead groups. This is helping to further marginalize them and to create counter movements to shut them down regularly. They have little crossover into mainstream right-wing circles, and this makes them a toxic organization that even those on the radical right repudiate. If the counter-organizing continues to maintain its intensity, then Trad Youth will continue to be rejected by venues and the communities they call home.

2 thoughts on “Trad Youth Network Conference Gets Banned from Venue”