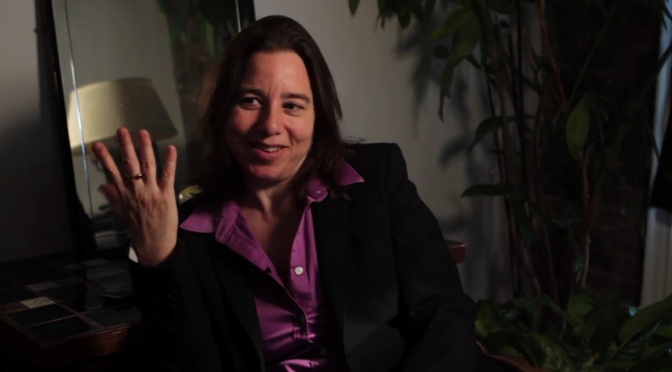 A recent series of headlines from well-known newspapers and news websites may have caught your eye if you are a fan of Sarah Schulman.  The novelist and playwright is well known both for her stage work and working on LGBT rights, including AIDS activism with ACT UP and direct action organizing with the Lesbian Avengers.  Schulman, now a professor at the City University of New York, is now being touted as a “suit and tie” anti-Semite.

The accusation comes from a CUNY student chapter of Zionist Organization of America, one of the oldest pro-Israel organizations in the world with over 30,000 members.  The accusations come, in part, from her sponsorship of the student organization Students for Justice in Palestine at the College of Staten Island.  Students from the ZOA wrote a letter to state Senator Jack Martins as well as bringing these charges before the CUNY administration.

The content that they use to make these allegations are largely things like tweets, support for the student organization and their work, and her public statements and writing on the Israel/Palestine conflict.  An example of this cited by the ZOA is an October 11, 2014 tweet from Schulman wrote saying, “I question the idea of exceptionalisms[..]The murder of 2,000 Gazans also reflects Jewish values.”  In response to accusations about anti-Semitism in her tweets, she also wrote “That’s not anti-Semitic to say that people who killed people murdered them.”

In 2012 she published Israel/Palestine and the Queer International, a book that shifts a little from her political work of the past.  The allegations have settled largely on, what for Palestinian human rights activists, are pretty standard discussion points.  This includes the violence perpetrated against children in the Gaza Strip by the Israeli Defense Force, using language like “murderers” to describe them.  The students at ZOA have asked for Schulman, who is Jewish herself, to be removed from the adviser for the student group.

The purpose of Students for Justice in Palestine is to harass, intimidate and frankly assault Jews attending schools, and we can’t have the government or the university underwriting a hate group,” wrote Senator Jack Martins, who agreed with the ZOA about the group and Schulman.

The event culminated in forcing Schulman before the CUNY Task Force on Anti-Semitism, formed to look at incidents on the city campuses.  Schulman said afterward that it was clear that the college was after the student group specifically, and the inquiry was less about her and what she had said.  She was forced to discuss accusations against SJP that had no evidence, like the claim that they drew swastikas on campus.  She focused in the conversation about the students that she supported, and how their experience was the focus of the group and how anti-Semitism and homophobia was both never tolerated and never seen.

I also spoke about the students themselves: how much I respect our students, and how much I have been enriched by working with them. How many of our SJP students are Palestinian. Their families have been displaced. Their relatives have been held in illegal detention. They have been denied entry to Israel/Palestine because of their political activism. I told the Task Force that I have come to know the students, and some of their family members. That they have NEVER been anti-semitic or homophobic or done anything that justified any kind of negative institutional response.

One of the accusations was that a “Jewish student” hid her Star of David when she saw Muslim students. Besides the fact that this has nothing to do with SJP, I explained to the Task Force that there are Jews who have dehumanizing views of Arabs, Muslims and Palestinians, and project enormous anxiety onto to them. But that this has nothing to do with Muslim students, themselves. And certainly is not their fault.

In this statement, put on her Facebook on October 22nd, also she discussed Zionism as a concept with the panel, which she said was must different today than the historical trajectory of Judaism.

Then we discussed the relationship between Zionism and Judaism. I testified that since the onset of Zionism, since Theodore Hertzl published his book “The Jewish State” in 1896, there has been disagreement among Jews re Zionism. That for its entire history, for 5,700 years, Judaism has been a dialogic religion rooted in commentary and inquiry. And that this current moment is the only time that Jews have been told to be homogenous in thought. That in fact, this impulse to force all Jews into one opinion is ahistorical and not Judaic.

She went on to discuss how Abe Foxman of the Anti-Defamation League has approved of how CUNY was handling the allegation, showing tacit support for the singling out of Schulman.

When looking at Schulman after the allegations we wanted to be open to the idea that creeping anti-Semitism had, in fact, made its way into her discourse.  This has happened inside of the Boycott, Divestment, and Sanctions movement, not because radical support for the Palestinians and opposition to the State of Israel is inherently anti-Semitic, as Abe Foxman would have you believe.  Instead, it comes from a lack of a clear understanding of the historic role and character of anti-Semitism and the inability to for the movement to confront creeping caricatures, conspiracy theories, and anti-Semitic anger that has made its way in.

Instead, what we found was that Schulman’s accused “anti-Semitism” was almost purely one that is made up of for her pro-Palestinian organizing, and lacked any of the key qualities that anti-Semitism is made up of.  This vision of anti-Semitism is not built on any of the historic understandings of what anti-Semitism actually is, whether it is an unfair conspiratorial view of Jews or a targeting of Jews that is unique to their position as Jews.  Foxman makes the allegations that if you support other national liberation movements but oppose Israel, then you are anti-Semitic, plain and simple.  This erases the historical injustices of the formation of Israel, the colonization of land, the removal of families, the violent ethnic cleansing of the people living in the neighborhoods that was acquired.  It tells us that the ongoing atrocities, the imprisonment of Gaza, the building of Apartheid walls, and the ongoing imperialism in the settlements, is just common to liberation struggles.  This absurdity strips us of the ability to see anti-Semitism as an accurate phenomenon, one that continues as a point of genocidal racism that is not synonymous with criticism of Israel.

The ZOA itself is not a representative Jewish voice, but instead one that is uniquely Israeli in politics.  As Schulman pointed out, there is no “absolute” legacy for Israeli politics inside of the “Jewish people.”  This is, in part, why we oppose the use of the term Zionism, as it is also a Jewish religious concept, only one interpretation of such is actually the modern State of Israel.  We may make different language choices than Schulman has (such as not using the term Zionism), but this does not an anti-Semite make.

When looking through Schulman’s public statements, as well as the allegations of private statements and behavior, we found not one single example where charges of anti-Semitism could be leveled.  The danger this presents should be obvious as a political issue over the behavior of Israel is at stake here, not Jewish people or Judaism as a tradition and faith.  This creates a culture of social criminality for critics of Israel, equating the very real threat of anti-Semitism with incredibly logical politics on the left.  For Sarah Schulman, these allegations could destroy her life, get her fired, force her books to be pulled from shelves, and get her blacklisted from many of the artistic circles she has spent her life and energy to be a part of.  For many young activists, this could end the possibility of careers before they even begin.

At the same time, it obscures the actualities of anti-Semitism, giving reasonable cover to those that do perpetrate images of Jews as evil and conniving.  These voices are increasing as neo-fascists movements increase in the U.S. and Europe, but with a hazy understanding of what actual anti-Semitism is it is becoming more difficult to single those reactionaries out and to create a movement to remove anti-Semitism from the social discourse.

We are especially sensitive to anti-Semitic discourse, going further in our analysis than many would simply because creeping anti-Semitism has occurred inside of left spaces through areas like anti-banking politics and anti-Israeli ideas.  This, however, isn’t an example of that, and the idea that people like Schulman can be targeted with charges of anti-Semitism to wash over important politics is both frightening and revolting.

The incident at CUNY is not unique as a report from the University of California has now made the allegation that opposition to “Zionism” is often just a cover for anti-Semitism.  The administration plans to be asking for regular reports on intolerance, with a focus on anti-Semitism.  This is the kind of monitoring is something we actually support as challenging racism and anti-Semitism on campus is an important battle, but if the equation is that anti-Israeli politics are synonymous with anti-Semitism, then we will see the censorship of Palestinian politics on California campuses under the guise of fighting racism.  This would fundamentally undermine the BDS movement, which has followed the South African Apartheid movement in being heavy on campuses and pulling for campus divestment in Israel and the settlements.  The move would essentially socially criminalize Palestinian activism, and reframe the conversation of Israeli atrocities so that they could never be fairly discussed.

This is a point that Schulman knows well, and even if the CUNY administration decides that neither she nor SJP have done anything wrong, this may taint the conversation on CUNY campuses for years.  For our part, with our position that anti-Semitism should be rooted out at any point, also want to make a clear statement about what anti-Semitism is, and what its not.  We support Schulman and SJP’s work on campus and want to keep a conversation alive about how to correctly identify anti-Semitic behavior, and how to support the Palestinians to find justice.

One thought on “Sarah Schulman is Not an Anti-Semite”