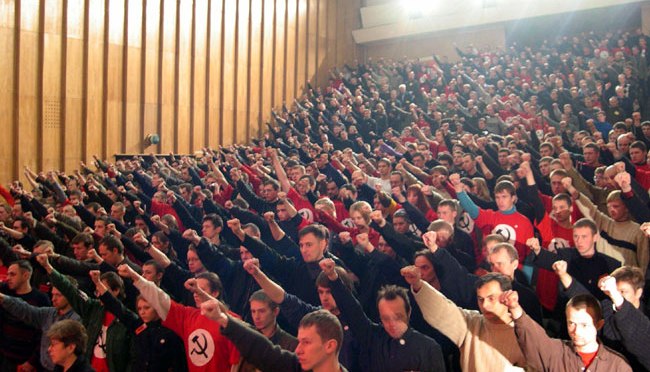 As many of the readers will know, Russia has been on the vanguard of the worldwide rise in the radical right.  The fall of State Capitalism(Socialism) resulted in unrestricted capitalism and a Balkanization where national identity became a point of massive contention.  Eurasianism, Third Positionist ideas under the “national Bolshevist” idea, as well as ultra-conservative politics influenced by the Russian Orthodox Church has shifted the entire country to the right.  This includes the Russian State, but this is really only in result to a shift in the demands of the population.  Many Russian neo-Nazi groups, who often still show allegiance to Communist “heroes” that they have re-interpreted as Russian Imperialists, have created violent “flying squads” that attack immigrants and queer folks.  This has made Russia one of the most dangerous countries for non-straight, non-white people, and a burgeoning area for “black shirt” movements.

The Associated Press is now reporting that Russian neo-Nazi leader Ilya Goryachev has been found guilty on five murders that he ordered followers to carry out.  The AP’s release outlines the entire case:

Moscow’s highest court sentenced a leader of a militant neo-Nazi group to life in prison Friday after he was convicted of ordering five brutal killings, including that of a prominent human rights lawyer.

The Moscow City Court said in a statement Friday the life sentence reflected the “exceptional danger of the defendant for society.”

Several activists of Goryachev’s group, called The Militant Organization of Russian Nationalists, were sentenced to jail time earlier this year.

Goryachev, who pleaded not guilty to the charges, was hiding in Serbia before he was extradited in 2013.

Among those murdered by Goryachev’s group is lawyer Stanislav Markelov, who was shot after leaving a news conference near the Kremlin in January 2009. Markelov, 34, was appealing the early release of a Russian military officer convicted of killing a young Chechen woman. A journalist walking with Markelov, Anastasia Baburova, also died in the attack. A Russian nationalist extremist from Goryachev’s group was sentenced to life in prison for the killings in 2011.

Recent high-profile trials of neo-Nazis like Goryachev have been perceived as the Kremlin’s attempt to curb xenophobic views that have been increasingly popular in Russia in recent years.